The majority of small and medium-sized enterprises want to receive money to buy agricultural machinery. FinancEast, a program for which the European Union allocated 9.5 million euros to provide support to small and medium-sized enterprises in the Ukrainian government-controlled territory of the Donbas, was launched on 19 December 2019. Even back then, some players were saying that the available funds will last for only a few months.

Delo.ua asked the participating banks how this program is being implemented and whether there is still any money left to provide funding to entrepreneurs in the Donbas.

Rules of the “game”

It is worth reminding that under this program, entrepreneurs in the Donetsk and Luhansk Oblasts may be eligible for a grant compensating up to 50% of the cost of investment projects financed by OTP Leasing, Oschadbank and Ukrgazbank, which together with the German-Ukrainian Fund (GUF) signed this program.

During the presentation of FinancEast program, OTP Leasing CEO Andrii Pavlushyn who attended the ceremony suggested that the 9.5 million euros allocated by the European Union won’t last long, and said that OTP Leasing will close its program by the end of January 2020.

According to the total limit

The first to participate in this program was Oschadbank.

“Oschadbank became the first among partner banks of the German-Ukrainian Fund to start financing customers in the country’s east under FinancEast program. The first enterprise in the Donetsk Oblast to receive a loan was Vendemia farm in Lyman, and in the Luhansk Oblast, the first loan was given to Sulimov farm in Milove. Both loans were provided to finance the purchase of agricultural machinery,” the bank’s press service told Delo.ua.

An Ukrgazbank representative told Delo.ua that their bank is presently reviewing almost 20 applications for the total of over UAH 150 million, most of which are applications from customers operating in the agricultural sector.

“The majority of applications concern the purchase of agricultural machinery, but there are also some that request financing for the purchase of commercial vehicles or equipment. All applications submitted to our bank fit into regular commercial activity of small and medium-sized business customers,” the bank’s representative said.

In the meantime, in response to an inquiry from Delo.ua, a representative of OTP Leasing (whose CEO was actually the one who forecasted that the program will end by the beginning of February) said that it’s still too soon to talk about FinancEast program, because there are no implemented projects yet.

Considering that according to the program’s terms, the partner banks are not given a separate limit and all of them have to work under one common program of 9.5 million euros, OTP Leasing should hurry up.

“Moneys are allocated to this program according to the following principle: the partners submit registers and the German-Ukrainian Fund endorses them, subject to availability of budget. UAH 4.5 million have already been endorsed via Oschadbank as of today,” an Oschadbank representative said.

According to Ukrgazbank’s estimate, the limit allocated by the European Union will be utilized within the first quarter of this year.

Considering this circumstance, Ukrgazbank recommends potential customers to hurry up with submitting their applications to the bank, even though they believe that the successful implementation of this program could become a serious argument in favor of increasing its limit or launching new programs in the future.

The main criteria for potential borrowers include: 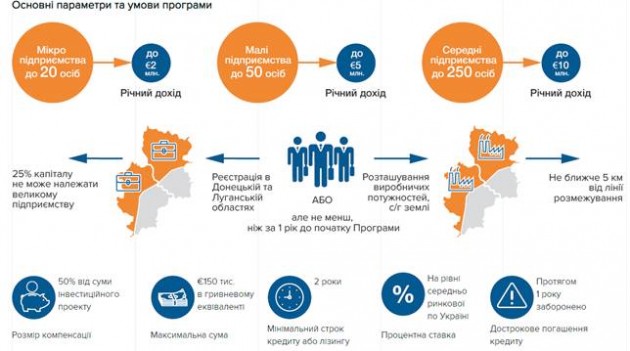 However, bankers admit that receiving money under FinancEast program is a bit harder than in the case of regular lending.

“This program is indeed somewhat more difficult than in regular lending, as it requires a more extensive document package and involves a more complex process of issuing funding. Perhaps it’s the only thing that affects the speed of making decisions and disbursing loans. Many documents have to be returned for finalization. However, it is something that could be expected, because it’s the first time entrepreneurs participate in such program,” an Ukrgazbank representative said. At the same time, the bank is ready to help customers and consult them on all relevant matters.