Little remains from this fortress, basically only traces, but Tustan is still one of the most interesting tourist attractions in this region of the Carpathians. Read about a grant from the EU Creative Europe programme for development of unique Tustan Reserve and another EU project on the reconstruction of the Cultural Center “Cottage in Hlyboke”.

If you pull off the Kyiv-Chop Highway toward Urych (a village in the Skole Raion of the Lviv Oblast), some 20 kilometers farther down the road a magnificent view will open before your eyes: two ridges of crenulated grey rocks standing like fabulous towers on a hill among a thick Carpathian forest. These are the Urych Rocks named so after the nearby village. 600 years ago, a wooden fortress called Tustan stood on these rocks. Little remains from this fortress, basically only traces, but Tustan is still one of the most interesting tourist attractions in this region of the Carpathians.

Back in the early 19th century, man-made marks on the Urych Rocks drew attention of scientists, local lore scholars and writers, such as Ivan Franko. But the studies began in earnest only in 1971, when Mykhailo Rozhko, an architect and archeologist from Lviv organized the first expedition to these rocks. Since then, he led scientific expeditions to Tustan every year.

Mykhailo Rozhko’s expeditions have revealed that the remains of stonework and the grooves cut out in the rock are all that is left from Tustan Fortress of the 9th – 16th centuries, an important strategic fortification of the Carpathian Defense Line that ran along the border of the Kievan Rus and later the Principality of Galicia-Volhynia. In addition, the fortress served as a district center and a customs post. This road was used mainly to transport salt from Galicia to Europe; it was also a section of the Great Silk Road from China to Portugal.

After Europe started to produce its own salt, the fortress lost its significance as a customs post, and because of political transformations it went out of use as a fortification as well. Since the 16th century, Tustan has gradually sunk into oblivion; the wooden structures have rotted out, and centuries have passed before people recalled it again.

For over 30 years, Mykhailo Rozhko examined Tustan in detail. Based on cavities in rocks, the scientist graphically reconstructed, with the precision degree of up to 90%, the appearance of ruined fortifications (the incline angle and the length of grooves and cavities allowed to determine the height of walls and the shape of acute-angled roof). After Mykhailo’s death, his son Vasyl Rozhko founded Tustan Historical Cultural Preserve and became director of the fortress museum. Today, Vasyl is the head of the same-name civic organization concerned with preservation and development of the fortress itself and the cultural landscape of Urych.

First of all, these are the Urych Rocks themselves and the remains (or, rather, traces) of the fortress. The medieval builders brilliantly took advantage of the natural conditions to erect a truly unassailable, unique (for that time) fortress. Two ridges of rocks form natural walls, which were supplemented by wooden structures: walls, roofs, drawbridges, portcullises. For centuries the fortress was improved and rebuilt, and the researchers define five periods of its existence. In its heyday, the fortification towered 90 meters above the valley, with the main structure being 25 meters high. 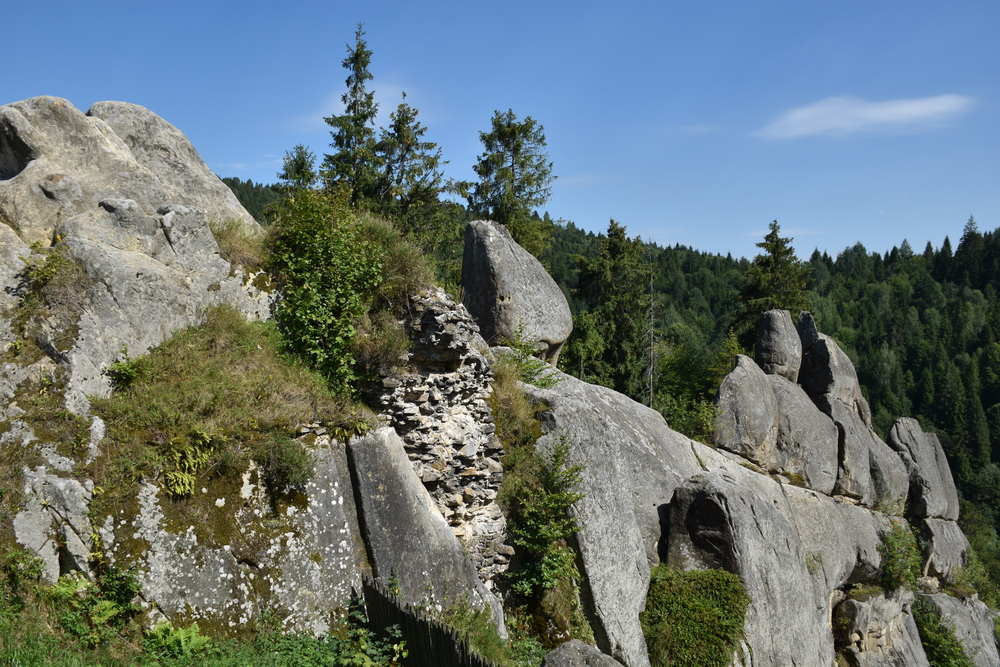 Today, you can see all traces left from the medieval fort by walking around the rocks on wooden bridges with stairs and from an observation site offering a wonderful view of the valley. 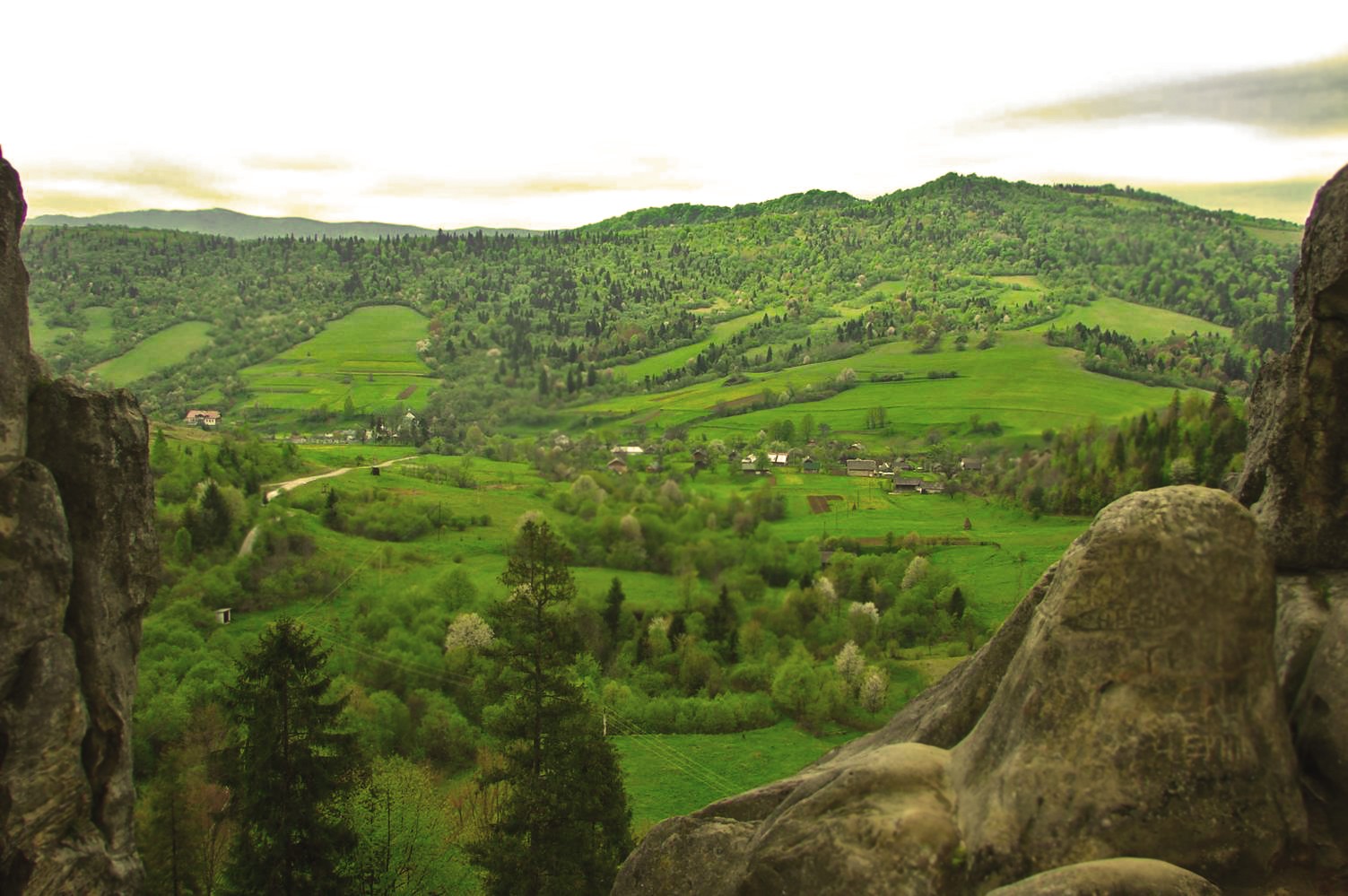 The rocks are strewn with passageways, caves and narrow manholes; they still contain cavities and grooves for wooden structures, and also, man-made and natural petroglyphs. Among the man-made ones, the most interesting are depictions of animals (wolf, horse, deer) and weapons. Natural petroglyphs are, in particular, round holes resembling eye pupils of some giants. They have long been believed to be pagan images of the sun, but in fact, these are simply remains of weathered petrified sea sponges, reminding about the ocean which was in this place 25 million years ago.

Thousands of interesting artifacts have been discovered during excavations and clearing of the water well in Tustan: spear and arrow tips, pendant cross, mace, needles and book locks (in medieval times, books in leather covers had locks), coins (including Arabian), remains of wooden structures (beams, stakes), and beautiful tiles. Some of the discoveries are kept in Tustan Museum in Urych village, 700 meters away from the rocks. 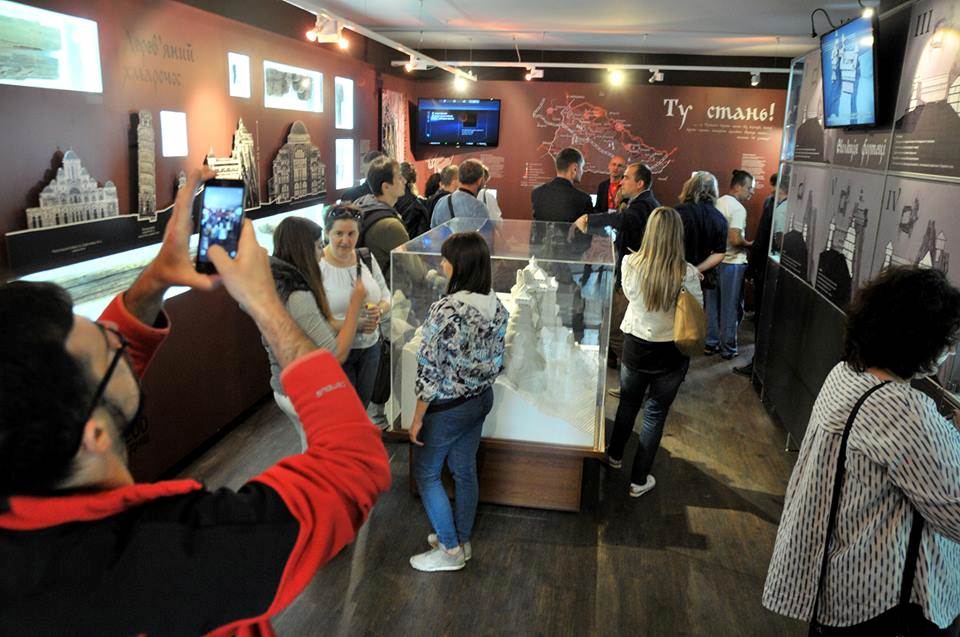 This a small yet modern interactive museum with interesting exhibits, where a visitor can learn everything about the history and researchers of the fortress, and most importantly, see a 3D model of all five periods of Tustan’s existence. We also recommend installing in your smartphone or tablet computer an augmented reality app: point your gadget at the rocks from any side, and you’ll see what the fortress used to look like. This program was developed by the Ukrainian IT company SoftServe based on Mykhailo Rozhko’s graphic reconstruction.

In addition, a virtual reality attraction will be launched on the fortress’s premise in 2019: put the helmet on, lean against a hang glider-like structure, hold the control bar and “fly” over the fortress. To make the sensation truly real, there is a ventilator imitating wind.

On the rocks and the surrounding area you can also see art objects which appeared there in the summer of 2018 under Territory of Inspiration project financed with a grant from the European Union’s Creative Europe program. 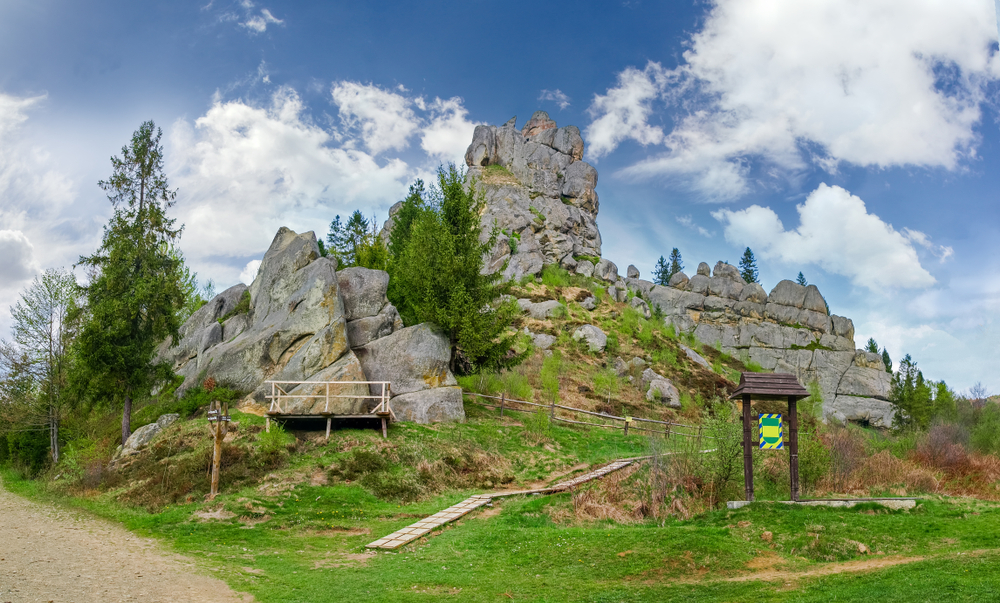 11 artists from four countries (Ukraine, Belarus, Poland and Russia) stayed in Urych for several days and, inspired by the legends and beauty of this place, created 12 art objects inside Tustan Preserve. All these objects artistically reconstruct the former majesty of the fortress. For instance, when you’re only approaching the rocks, you’ll be greeted by Arrows, a work by Belarusian artist Dmitry Zaitsev: seven meter-long wooden arrows sticking out of the ground. They show us that arrows of Tustan’s medieval defenders flew for 400 meters, repulsing the enemy on far approaches.

In Salty Way work by Lviv artist Evelina Trintsolin, symbolic salt cubes are placed along the pathway on which tourists ascend to the fortress. In darkness, these cubes emit light. Vasyl Tatarsky, a sculptor from Kyiv, erected a group of horses made from wooden rods in the place of former grazing ground; the Zaitsev brothers created an allegoric, quite formidable Guard of the Fortress. Bohdan Lokatyr of Lviv and Margarita Zhurunova of Vinnytsia attached a mirror to a passageway among rocks, creating a play of reflections and space (The One Who Sits in a Rock). All objects, made from natural materials, excellently fit into the landscape, emphasizing and supplementing the natural beauty of this locality.

The village located within the preserve’s protected area is interesting in itself. It was first mentioned in documents dated to the 16th century. Before the 19th century, Urych was developed in a typical Boyko style: long log cabins with a gallery along the façade and a straw or wooden plank roof. Later on, its building style was influenced by the inflow of foreigners – Germans and Poles attracted by the oilfields discovered there in the early 20th century. A new wooden Saint Nicholas’s Church was built at that time, too. 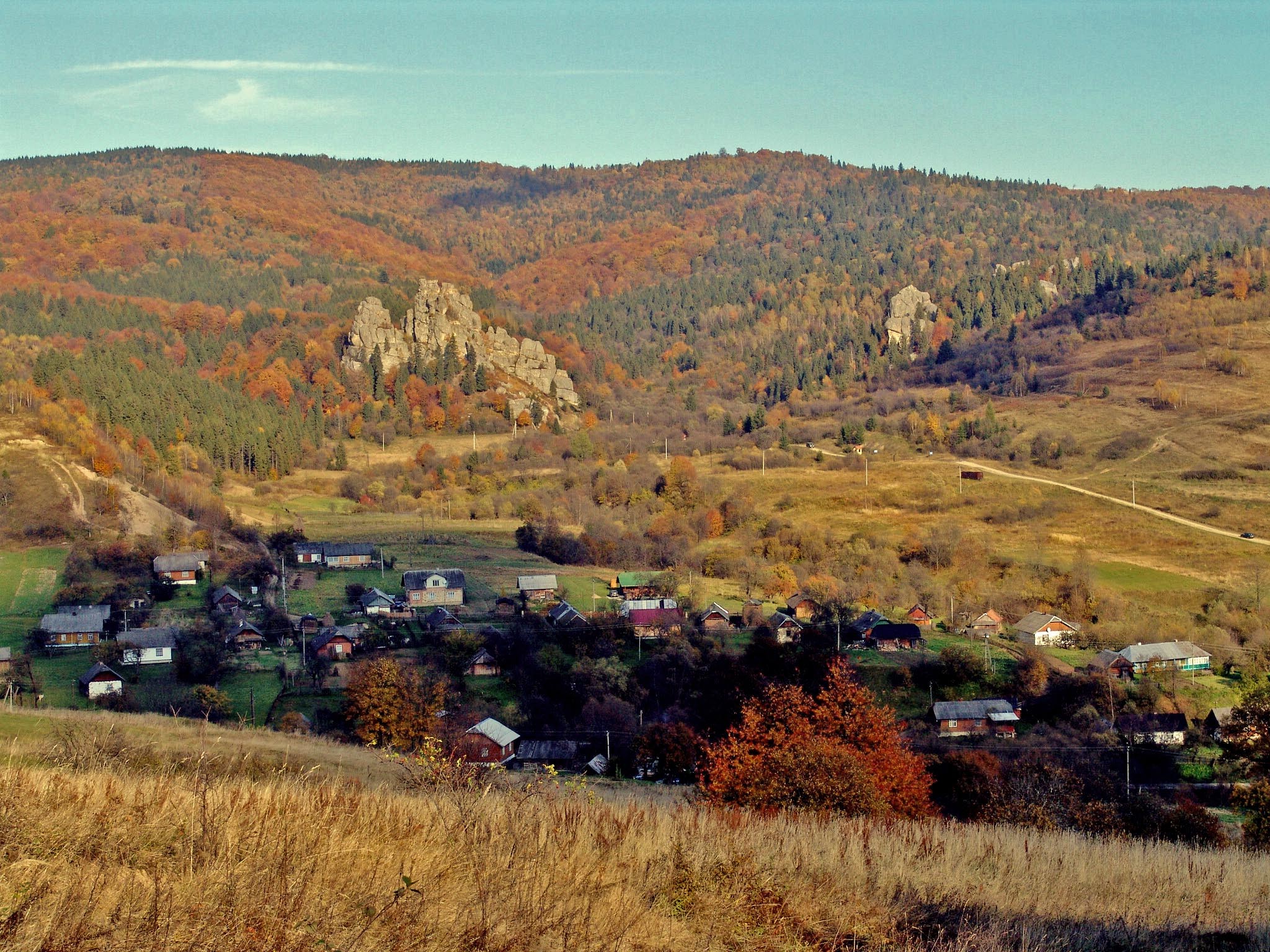 Preserving the village in its original form as a part of Tustan’s cultural landscape is one of the goals of this preserve. In 2018, Tustan civic organization received a grant for the EU project “The World of Carpathian Rosettes” under the 2014-2020 Poland-Belarus-Ukraine transborder cooperation program. The goal of this project is to preserve traditions, crafts and architecture of the land of Boykos. In particular, the European grant will be used to finance renovation of House in Glubokim, a museum of local history and ethnography in Urych. 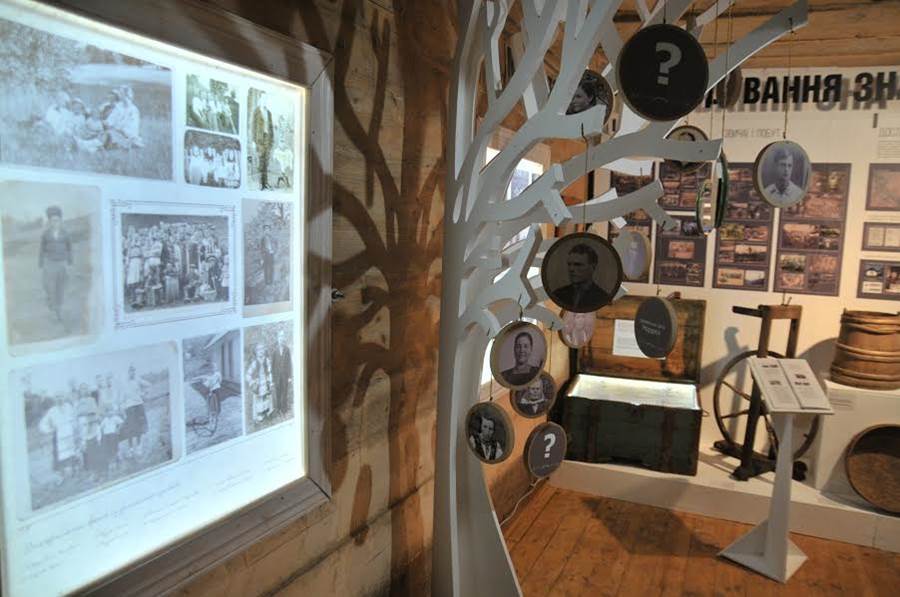 The museum is located in a historical building, a typical Boyko house that needs some renovation (for instance, replacement of the roof). They plan to add permanent weaving, pottery and other workshops of local crafts to the museum’s exhibits. It will be interesting for tourists and good for the locals, whom the preserve helps master new professions.

Another objective which the grant will help achieve is to create typical designs of traditional Boyko houses but from modern materials. When local residents decide to build a house, hotel or restaurant, they could use the ready solutions and won’t have to vandalize bucolic landscape by a three-story concrete cube with blue metal shingle roof. That’s how the authorities control development in the Alps – by strict supervision and regulation – and therefore, all buildings there look like medieval chalets.

How to get there? By car via Skhidnytsia (graveled road) or Kyiv-Chop Highway, turning right after Verkhnie Syniovydne village at the “Urych” sign (good, newly-built road). Another acceptable option is by bus or train from Stryi.

Where to stay? In a private guesthouse

Where to eat? By the foot of rocks, there are sources of excellent tasty water and improvised restaurants offering tasty dishes of Carpathian cuisine.

Ticket price: 52 UAH full, 26 UAH reduced. The price includes a visit to the fortress itself, Tustan museum and House in Glubokim cultural center. Tours are available the whole day, starting as soon as a group is formed. 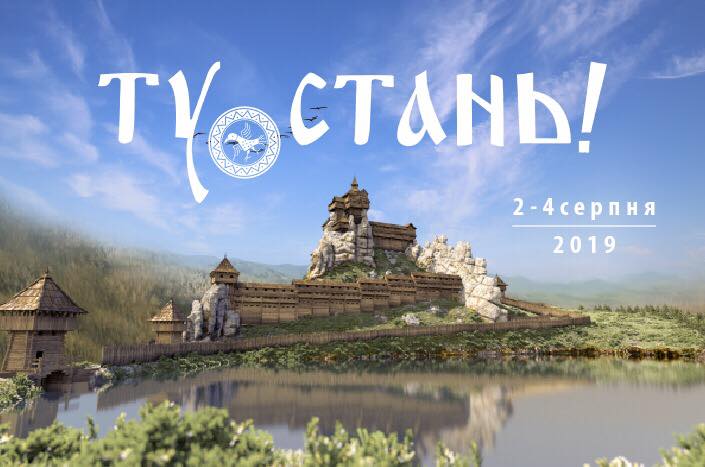 Tu-Stan! Fest: a festival of medieval Ukrainian culture, held in August and gathering thousands of participants including artists, musicians, writers, re-enactors and handicraft artisans (potters, coopers, thatching, forging and other artisans). In 2019, the festival will be held on 2-4 August.