Noplag is a Labiteam-designed service of identifying plagiarism in texts written by schoolchildren, university students or scholars. Na Chasi publishes an interview with Noplag CEO Oleksii Bochkov, who speaks about how the company’s internal project has grown fivefold in just a few months and why their team has focused on foreign clients.

Besides development, the company’s team worked on promoting projects in foreign markets, and therefore, often had to write English-language articles for websites. Sometimes, orders were too many to handle. That was when they decided to delegate certain copywriting tasks to the computer. The team enabled several tools checking texts for plagiarism, and grew sad: some of the services were too expensive, and the rest inadequate. As it often happens with startups, the need to create a better tool has occurred by itself. Soon, Labiteam began to use an own product developed for internal purposes, and in 2014, launched a free light version for users to try.

Technologies on which the anti-plagiarism system is based

One year later, Labiteam released a fee-based version with the completely updated UX and UI. And also, they added a grammar and spelling check, which they activated using an open-source program available online. The results were worse than expected: users complained about the underperforming check. Therefore, the developers deactivated this function in order to be associated only with a quality system that identifies plagiarism.

After getting an investment, the team also plans to develop machine learning. According to Mr. Bochkov, Noplag has accumulated sufficient data during the four years in business to test various hypotheses:

— We plan to launch data science this year as well, if we’ll have sufficient resources for that.

Oleksii says: from the very first day, we relied neither on Google’s nor on Bingo’s API, for Google’s API is deactivated and Bingo charges too high a price for commercial use. That’s why the lads have developed an own system that compares proposed words with available ones. This system consumes available resources more than anything else.

Since information from search engines costs a bundle, Noplag’s competitors scan results, in most cases, not via the Internet but via their own databases where they cache data. That’s why information contained in there is irrelevant, as they cannot update billions of pages day after day. According to Oleksii, the advantage of Noplag is that they can scan the Internet in real time, without using additional services.

About the competition with an American giant

Noplag’s biggest competitor abroad is TurnItIn. Today, this service can be found in many schools and universities across the United States, Europe and Africa. They monopolized the market, and their key advantage is that they were launched back in 2001. Therefore, they were able to accumulate in their database a lot of materials scanned by their users. The bulk of the Ukrainian service’s audience are students.

— They use our service, because Turnitin won’t let you check the same text twice: the data is stored and then presented as 100% plagiarism. That’s why students are afraid of uploading texts there, because the lecturer would use that very service to check their texts. During our talks, one of the investors asked me: “What makes your competitors better than you?” In response, I scanned the same English-language text using different services.

The first service revealed 70% plagiarism but didn’t find the source from which the text was copied. Noplag confirmed that the text is 100% stolen. The third service identified only 60% of plagiarism in that text.

“However, we cannot always guarantee 100%, because technical errors do happen. Therefore, we recommend checking twice”, the project’s CEO says. And if you try to fool the system and rewrite the text in your own words, the system will realize that as well, because it determines synonyms. However, there is a weak spot, too: if you translate a Ukrainian-language text into English, the system won’t recognize it, because it wasn’t in the database.

Who trusts Noplag and why

60% of Noplag users are high schools and universities in New York, San Francisco, Malaysia, Bulgaria, Turkey, Germany. Oleksii says that although the audience is very diverse, the main traffic comes to Noplag from the States:

— 15% of our clients are businesses, and the rest are individual users: lawyers, historians, scholars.

Today, Noplag makes $5 thousand a month from subscription fees. The fee-based version for individual users costs $11, for businesses $25 per five users, for schools and universities 50$. However, special interest in working with schools stems not just from monthly subscription fees. Oleksii says that Noplag sometimes signs very interesting contracts. One of the most recent examples is a Spanish university willing to pay 12 thousand euros annually. 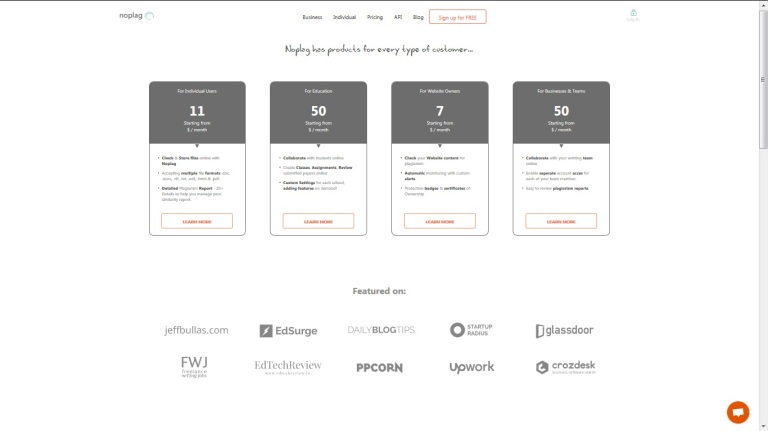 About the decision to enter foreign markets

The CEO says: from the business point of view, Noplag caters to affluent audience. Secondly, the Ukrainian government still does not see the need in plagiarism checking services for educational institutions, although some universities are trying to do that with their own efforts. Universities do not have a certain statute saying that all works must be checked and cannot contain more than 10% of plagiarism. If the plagiarism rate is exceeded, a student is to be disciplined:

—  In other countries, anti-plagiarism is a normal practice. But in today’s Ukraine, we can see the same situation as when I was at the university: we downloaded research abstracts from websites, such as, for example, referat.com.ua, printed them out, read before the audience, received credits.

Even though Noplag checks only Latin-script texts today, Oleksii says: they were ready to create a Cyrillic-script version even for free, had Ukrainian schools and universities needed that.

Difficulties and how to overcome them

When the service became fee-based, all schools and universities began asking serious questions: who are the Noplag team, who are their clients, can someone provide references? Since the team is based in Ukraine and the users are thousands of miles away, the clients became suspicious. We had to provide answers to all their questions, because the inquiries concerned public funds:

— for Western companies, it is very important what other companies think about you. That’s where an accelerator comes to rescue: it will have people who will create references about us and meet in person.

Another difficult case in the startup’s history was this: one day, the system simply “collapsed”, and because of that, the Noplag page was flooded with negative comments from users. Oleksii explains:

— We are an outsourcing company, so our website was initially intended for internal use. All money invested in it was for our own needs.

Not paying too much attention to it, we haven’t noticed when our internal service has suddenly turned into an independent startup: in just a few months, visitor traffic has surged from 100 thousand to half a million users.

To develop technologies, servers and capacities, one needs investors. So, while the team was busy with looking for investments, they decided to get disconnected from the payment system and suspend the acceptance of new fee-paying users to make sure that the audience does not grow while they have insufficient capacity for that. On the other hand, they retained former clients valuable for their project.

How to find an accelerator for your startup

As we wrote earlier, Noplag was included to Startup Accelerator this summer. The project will receive $130 thousand and undergo acceleration in New York. Oleksii shares his experience in the search of an accelerator:

You have to compile a long list and apply not to 30 but to 400-500 accelerators, first selecting the right niche.

New solutions the team is going to create

Today, the developers are working on a product that would allow websites to monitor whether their content is being copied. If a system detects copying, the owner of content will be notified about what was taken and who did it:

— Ideally, lawyers should be connected to this service to enable the author of content to take it down (block similar content and the website containing it — editor’s note).

Also, Labiteam has developed a system in which every entrepreneur may work with his copywriters: give tasks and monitor their accomplishment. At the end, the system itself will check the text for plagiarism.

The article was originally published on Na Chasi