Between May 9 and May 24, the annual Europe Day celebrations took place in various cities across Ukraine. Every year these festivities focus more and more on promoting discussion, training sessions, and information sharing. Lavish parades and dancing no longer dominate the Ukrainian streets as they once did during Europe Day celebrations. Of course, such activities are colourful and create a holiday-like atmosphere, but European integration is primarily about internal transformations, and Europe Day is an opportunity to talk about that.

For example, in Ivano-Frankivsk, the EU Delegation held a hackathon with the theme, “My European City.” This one-day competition was aimed at helping citizens strengthen their concepts for projects to change the urban landscape and develop local communities. The idea behind the event was that Ivano-Frankivsk, like other Ukrainian cities, should become more open to change and work toward European standards of living. In addition to the hackathon, a discussion club was held in Ivano-Frankivsk within the, «EU: the choice of the Ukrainian youth” project. This event also disseminated information about the EU and Ukraine’s European integration.

Ivano-Frankivsk activist Victor Zagreb during the hackathon “My European City” 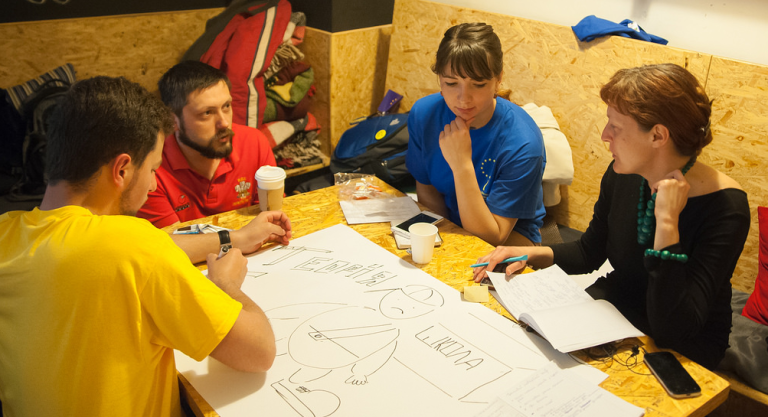 In Odesa, businesspeople benefitted from a seminar focused on an important and timely topic: “How to enter the EU market:  opportunities, ways and tools.” This event was especially topical considering that, as of January 1, 2016, the Deep and Comprehensive Free Trade Area provided by the Association Agreement is now in force. Diplomats and experts on EU-Ukraine trade from both the EU and Ukraine shared their experiences.

In Pokrovs’k (formerly Krasnoarmiysk), in the Donetsk region, people gathered to discuss EU support for a wide range of projects. Diplomats and EU experts explained how to get EU financial support to implement projects in Ukraine and discussed the evident outcomes of cooperation with the EU in the region.

The European Union celebrates Europe Day on May 9. The celebration honours former French Foreign Minister Robert Schuman’s historic speech on that day 1950, when he declared: “Europe will not be made all at once, or according to a single plan. It will be built through concrete achievements which first create a de facto solidarity. The coming together of the nations of Europe requires the elimination of the age-old opposition of France and Germany. Any action taken must in the first place concern these two countries.” Schuman urged France and Germany, as well as other European countries, to unite the coal and steel industries and give them a new supranational governance structure. The idea was that by combining efforts and distributing the economic results, European countries could avoid the accumulation of military power against each other, ensuring peace on the continent.

Ukraine began celebrating Europe Day after a presidential decree issued in 2003. However, the traditional date was abandoned because it fell on Ukraine’s Victory Day. As a result, Ukrainians mark Europe Day with a flexible schedule on the third Saturday of May.