The Head of the EU Delegation to Ukraine, Ambassador Jan Tombiński, held his first press conference with Ukrainian journalists on October 16th. Read some of the highlights of his statements and replies.

On EU-Ukraine relations: “The main message which I try to convey in all my meetings [in Ukraine]… is the following: we have to focus on Ukraine as an independent country using the natural potential of the country.”

On the EU-Ukraine Association Agreement (AA): “We still have to go through 21 linguistic versions [of the AA] to prepare a common text. With its very technical language, in particular on the Deep and Comprehensive Free Trade Area (DCFTA), this process should be over before the end of this year. Then we have to ask Member States of the EU, and also Ukraine, whether there is a political will to sign the agreement and to submit it for ratification. For the political context for a positive decision, we need to show the EU Member States that the political elements are all there, and that there is no doubt that Ukraine is willing to continue on the way of associating with the European Union.”

On selective justice: “There is a quite large understanding [in the EU] of selective use of justice [in Ukraine]. And I rely upon the common knowledge and wisdom of the European Parliament and of international institutions observing the proceedings of the courts in Ukraine: they state that there are cases of selective justice.”

On elections: “We, as a European Union Delegation, don’t have an independent monitoring mechanism; we rely on the mission of the OSCE/ODIHR. We rely on the findings of the OSCE, and we are also in very close contact with Ukrainian bodies observing the election process, be it Opora, Committee of Voters, or Ukrainian political parties. There will be a comprehensive assessment of the electoral campaign, of the legal framework for elections, of how the election day is concluded and what happens with the vote of every single citizen: these are the major issues.” 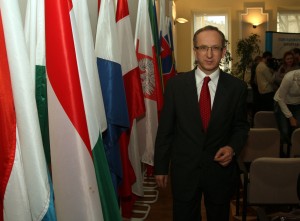 On energy: “This is one of the major interests of Ukraine: to be less dependent on foreign suppliers of energy raw materials, especially on one energy supplier.” After the Ukraine-Russia crisis at the beginning 2009, “the EU made huge investments in making Europe less dependent on one source of gas supplywhich lowered our energy dependence.”

On citizens: “The citizen it is not only someone who has rights, but also the one who has obligations, and the main obligation of citizens is to care about their common country… This is what we have to focus all our attention upon: to create citizens, not only voters.”