When you ask yourself a question about how to spend an eventful evening, one of the options is to watch a movie. You can go to a movie theater, or make popcorn yourself and watch a movie at home. Nothing could be simpler, or so it seems. However, not everyone has equal access to viewing films or serials. Persons with visual or hearing impairments often cannot visit movie theaters, because these theaters do not have special film adaptation equipment. Thanks to Accessible Films initiative and the latest technologies, it became possible for these people (to) see and (to) hear what previously had been unavailable to them.

The founders of Accessible Films initiative make audio descriptions and extended commentaries to films. This practice gives films a chance to gain a broader audience.

Earcatch and Subcatсh are the applications that help blind and deaf people watch movies.

Subcatсh is a mobile app with extended subtitles for deaf people. These subtitles are distinguishable for having special symbols: music, sound. To use them, a person simply has to activate the app on their smartphone, and it will begin displaying subtitles. Presently, it is not very convenient, because a user has to divert attention to the app to watch the movie.

“The additional soundtrack fills up spaces, explaining what’s happening on the screen when there are no dialogues. A person watching the film at home or in a movie theater can receive an absolutely objective picture of what is happening,” Viktoria Luchka, cofounder of Accessible Films initiative, says.

More information about the apps is available on Accessible Films website. 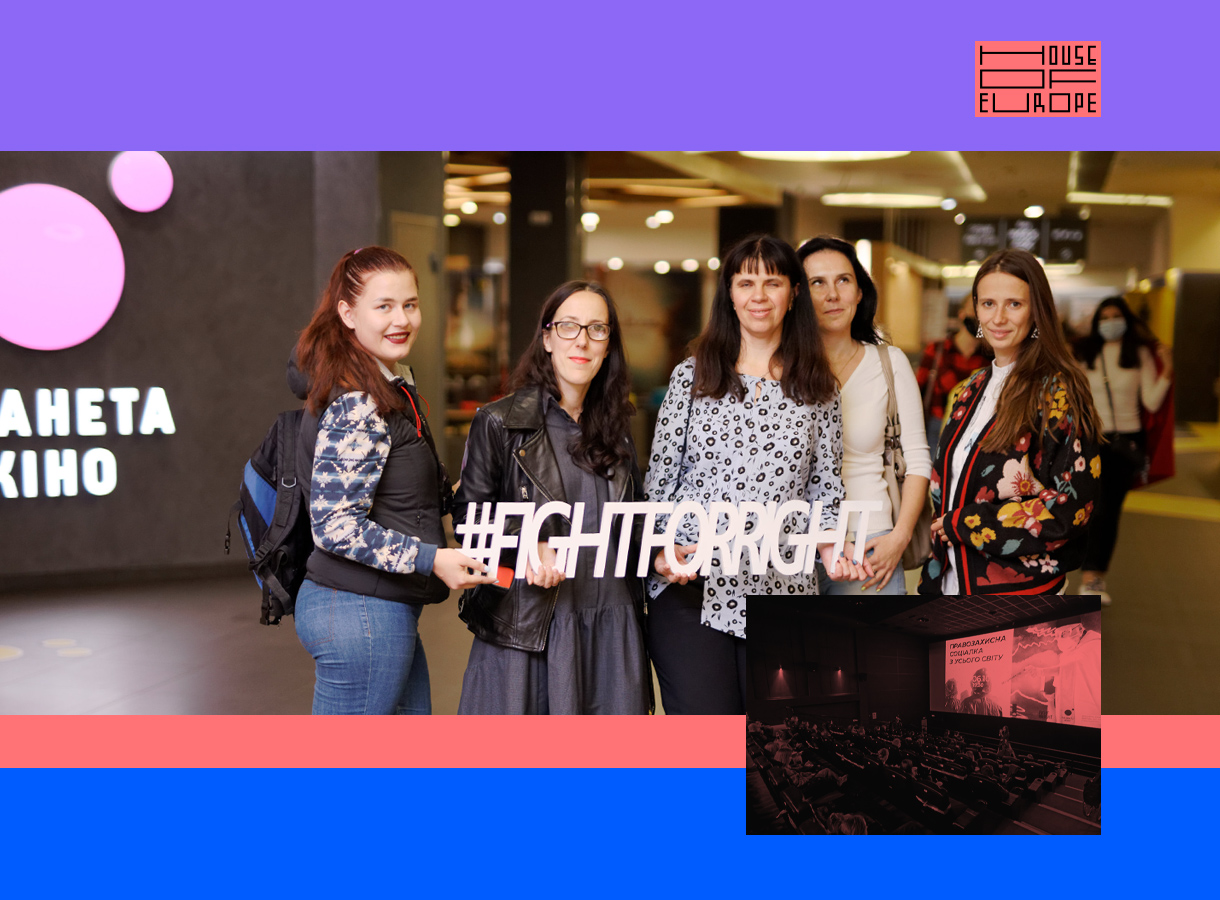 “When we are talking about a person with disability, we are talking, first of all, about a human being”: Viktoria Luchka, cofounder of Accessible Films initiative.

Accessible Films coordinator says that their mission to make sure that accessibility becomes an unalienable part of life of the entire society, not a sign of pity toward persons with visual or hearing impairments.

According to unofficial data, there are almost 1 million people with visual or hearing impairments in Ukraine. This is a huge potential audience for movie theaters. If accessible motion picture formats become available, these people will be able to visit film exhibitions and enjoy the movies.

“Cinematography is an element of cultural diplomacy, an opportunity to include a person to a social process. So, work on the apps is our way toward inclusivity,” Viktoria says.

History knows examples when inventions that made life easier for people with disabilities were becoming commonly used. That’s what happened to subtitles.

The developers of Earcatch and Subcatсh have an idea to integrate these apps into daily life. In that case, for example, you could “watch” movies while going about your household chores, when you cannot look at the screen all the time, or when you are in a crowded place and do not have earphones to listen to what the characters say.

If any products become inclusive right away, we can really create a world without barriers.

Accessible Films: who are they?

Accessible Films initiative has three cofounders. Viktoria Luchka, a public activist, an organizer of a bicycle race among blind people, a graduate of Lviv Business School. By the way, Accessible Films became her graduation project.

Yulia Sachuk, the Chair of Fight for Right civil society organization. She has a visual impairment, and therefore, creation of accessible films is her personal story. 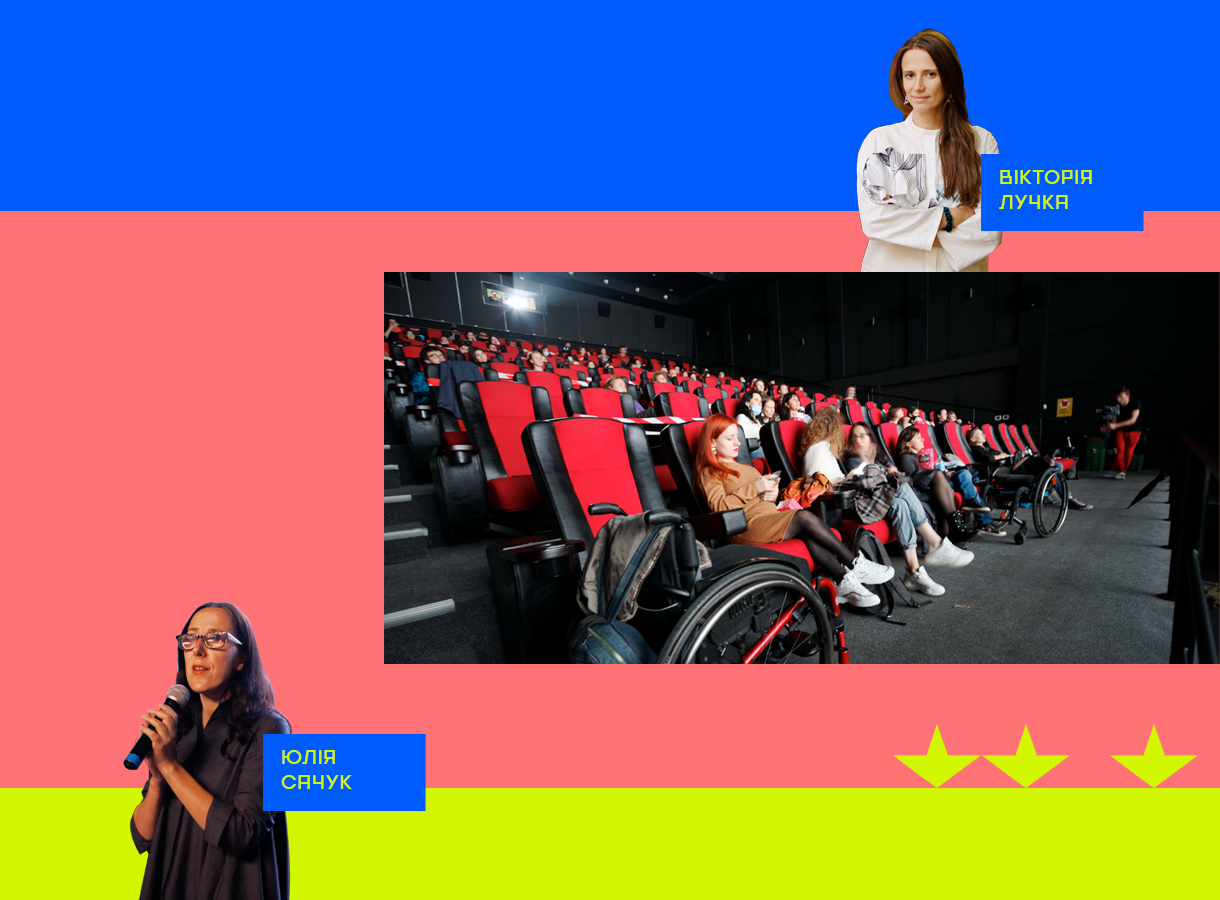 Yulia had problems with eyesight since childhood. Therefore, the study at school and university became a challenge for her.

“Teachers were telling me: “Why do you study here? Why don’t you go to a boarding school?”,” Yulia says.

“I started to use the knowledge gained at Amnesty International to protect the rights of people with disabilities, because I saw that in the human rights context the approach to the rights of people with disabilities is very limited. We have a rather social approach, where it’s about benefits or payments, or a medical one. But the equality, nondiscrimination and equal opportunities receive very little attention,” Yulia Sachuk says.

That was how Yulia began working on various initiatives: Fight for Right prints books in the Braille code, concerns itself with election law and cultural programs.

Accessible Films initiative was born very organically out of the entire activity, but its birth was prompted by an accident.

“One day at Docudays, a festival where Viktoria and I were its partners, we came to a premiere, and it was a Korean film. It was exhibited in the Korean language with English subtitles, so the next two hours I was going to just sit around there,” Yulia says.

Yulia could not see subtitles and had zero knowledge of Korean. Therefore, this film passed by her. That was how the idea to make extended audio descriptions to films was born. After the festival, Yulia and Viktoria began working with Docudays.

“We organized ourselves and began working on accessible films. It was important for us to develop it as social entrepreneurship,” Viktoria Luchka says.

As it turned out, developing social entrepreneurship in Ukraine is quite difficult, and in the beginning, one simply cannot do without a grant support.

The first project of Accessible Films was audio description to The Distant Barking of Dogs, a film included to Docudays program. Soon thereafter, the initiative received a grant from House of Europe and continued to develop in a broader format.

Grant support as an impetus to business development

“We work with official film owners and with those who hold rights. This is a lengthy and complex work, because to create audio description we need access to the initial material,” Viktoria Luchka says.

The participation in a grant program from House of Europe brought Viktoria and her colleagues cooperation with foreign experts and an opportunity to expand the partnership with Ukrainian film distributors.

Thanks to a grant, Accessible Films initiative received mentorship support from Dutch colleagues, who have many years of experience in creating audio descriptions to films.

Mereijn van der Heijden is the founder of Soundfocus, which this year will be making official audio description to the Eurovision Song Contest. The Dutch have developed the technologies on which Earcatch and Subcatсh apps operate.

“We launched Earcatch project in 2013, because people with visual impairment had almost no access to mass media. Audio description became available for the first time in the Netherlands in 2007, but only in three movie theaters. Today, Earcatch app is available for movies and for television, as all Dutch films and many TV serials are now available with audio description,” Mereijn van der Heijden says.

In September of this year, the Netherlands enacted a law obliging the government media to release content that could be accessible by all. This way, inclusivity is supported at government level.

Last year, Mereijn van der Heijden and his team launched Subcatch. Subtitles in Dutch are available almost always on television and DVDs, but movie theaters had a problem with it.

“The reason why we launched Subcatch is that movie theaters lacked subtitles in Dutch for deaf people and people with impaired hearing,” the developer adds.

The success of the Dutch applications enables the Ukrainian party to improve them and enlarge the area where they can be used.

From time to time, Accessible Films organizes exhibitions of films with audio descriptions and extended subtitles. People come alone or in couples, download the app, and when exhibition of a film begins, they can watch or hear it.

One of the exhibitions of this kind took place on 6 October at Kyiv’s Planeta Kino theater. The exhibition of Without Snot, a social advertisement from Molodiya Festival, received several dozens of visitors. Many of them were visually impaired people.

Maryna Poteliakhina is Acting Director of Mykola Ostrovsky Central Specialized Library for the Blind. It was not the first film exhibition of this kind for Maryna.

“The last movie I saw was Forgotten, and in addition, I saw The Shepherd and Mr. Jones,” Maryna says.

Before the app became available, she also visited movie theaters and regular theaters, but now, she feels much more comfortable: “You are not dependent on anyone, wearing earphones with this app, where everything is explained. You simply feel that you’re at the same level with all others.”

Maryna says that the availability of extended commentaries in regular theaters as well would’ve been very helpful with integrating into society.

“I visited a play with a companion who is also blind, and at the end of play we couldn’t quite understand what was happening, because there were no explanations,” the visitor commented.

Natalia Glovatska also came to a film exhibition. She teaches computer skills at Kyiv Center for the Blind, and understands like no-one else the importance of integrating the latest technologies for inclusion.

“Films with audio description make life much easier. I can go to a movie theater along with all others and watch films which my friends and relatives watch. It does not distract them, and simplifies my perception of the film,” Natalia says.

Natalia has been using the app since it was launched, and actively promotes it among her friends.

“For the first time I came across this app in the fall of last year. We learned it using this program. There, you can download films already available online and synchronize them. A serial was shown on TV, and it could be synchronized as well. In other words, a person can watch their favorite movies without leaving home,” the viewer shares her experience.

After watching the movie, everyone leaves happy, because inclusion really works. The only thing missing yet is diversity.

“It would’ve been great if other genres were available as well. Some love science fiction, others mystery films, still others melodramas,” Natalia Glovatska says.

As of present, Accessible Films initiative created audio descriptions or extended subtitles for 30 films. However, it’s only a drop in the ocean.

Today, the activists are working to make sure that Ukrainian and Hollywood films are exhibited in movie theaters already in accessible formats: with audio descriptions and extended subtitles, thus expanding inclusion onto the cultural sphere.

How to receive a grant?

You, your organization and its partners in the EU can also receive a grant from House of Europe for joint cultural projects. We look for projects based on digital technologies. It could be an idea applicable solely online, or the one combining online activities with personal meetings. The most important thing is for you to be able to implement your project under any scenario of quarantine restrictions.

What you can get:

Deadline: acceptance of applications ended on 20 October 2020. However, a new contest of international collaboration grants will be launched in the spring of 2021. Follow the news from House of Europe on the program’s website and its pages in social media.

More information about these grants.

House of Europe is a program funded by the European Union. It was created to promote professional and creative exchange between Ukrainians and their colleagues in EU states. Goethe-Institut Ukraine manages House of Europe program. The British Council, the Institut français d’Ukraine and Czech Centers are partners of the project’s consortium.