Canistherapy, that is, treatment with the help of dogs, has been used since the 1960s. This method of rehabilitation is popular in many countries, but for Ukraine it is new – the Ministry of Health has not yet recognized canistherapy. Nevertheless, dog-therapists already work  in our country and receive approval from small patients and their parents. 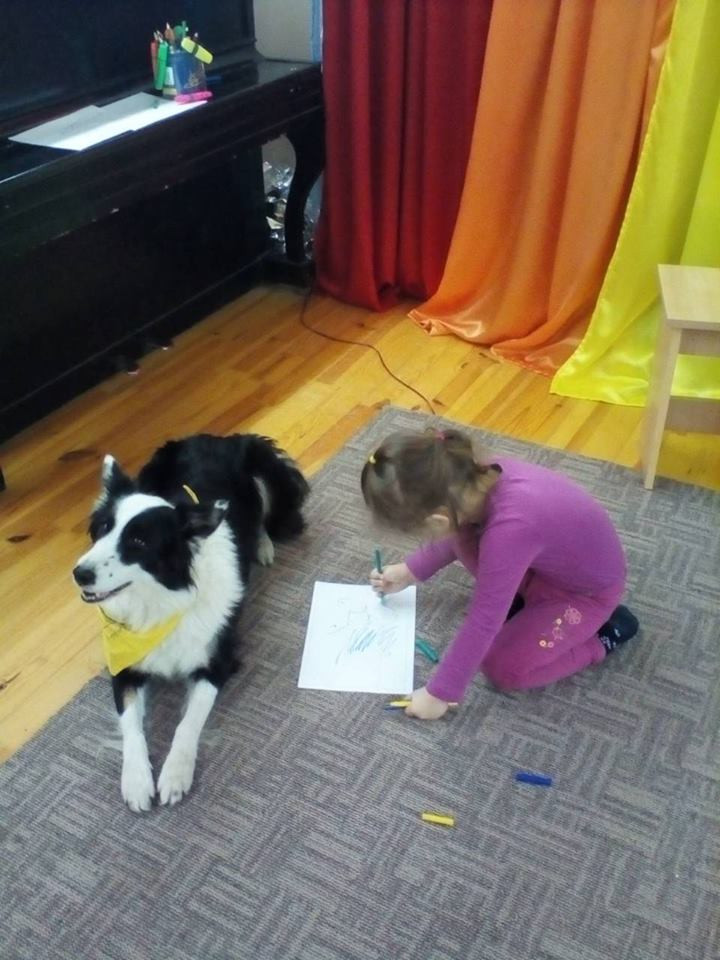 “The dog does not make a miracle, it is not a mechanical simulator. The task is to build activities with the child so that the dog acts as a motivator for action,” – Antonina Hoshovska, Project Manager of the European Union, says. “Social rehabilitation of people with disabilities in the transboundary region through the creation of conditions and training of specialists in the field of canistherapy”.

Studies show that interaction with a dog reduces the level of cortisol stress hormone and, instead, increases the level of oxytocin, a hormone of joy.

Canistherapy is used for nervous disorders, mental illnesses, infantile cerebral palsy, hypertension, depression in children and adults, as well as for adaptation to the everyday life of children and adults with autism and Down syndrome.

For example, according to the MoH Public Health Center, one child out of eighty-eight has autism, but upon condition of early intervention with corrective measures, the children can be fully adapted to social life.

In addition, dogs-therapists work with elderly people at geriatric boarding houses, as well as with adults with post-traumatic syndrome.

Olena Onopriichuk from Lutsk, the mother of a five-year-old Ania diagnosed as having motor alalia, has learned about canistherapy from her friend. Before going to school her child experienced reading and speaking difficulties. Though Ania went to the first class, she still attends exercises with dogs-therapists.

“We had an exercise with a dog Pusha. We had to make up her name by letters. When we started, Ania did not read at all, although she knew the letters. The girl made up the letters incorrectly, and the dog showed where there is a mistake,” – Elena recalls the first canistherapy exercise lasting about 20 minutes.

Also, the child walked with a dog and read to it. Mother of the girl admits that canistherapy is not only liked by children, but also has a positive effect.

“It seems to me that it is very good for children: they reveal themselves, become more open. Reading to dogs is very inciting and encourages the child” – patient’s mother says and adds that not only Ania, but also her sister attend reading with dogs.

Alla Koval is the director of Fastiv Educational and Rehabilitation Center, where about 50 children underwent a canistherapy course for a year and a half. She assures that there has not yet been a single zero-result case. Currently, about 15 children undergo treatment at the center: Every week two or three dogs-therapists from the Hero’s Friend Foundation help children.

How does “treatment by dogs” occur?

A session with children is preceded by a meeting with a specialist (for example, a psychologist or speech therapist), a cynologist with a dog, volunteer dog handler. A specialist, knowing the diagnosis of a particular child, develops a plan of exercises: what kind of exercises the child should do, in which of them a dog will be involved, and in which he will act just as an observer.

The exercise with a dog lasts up to 30 minutes, of which up to 12 minutes canistherapist is most active. Recommended course of canistherapy consists of six exercises. A child can become accustomed to a four-legged therapist, therefore it is necessary to change the dogs sometimes, Antonina Hoshovska says.

What dogs can be therapists

Dog size, breed or age does not matter. But the future dog-therapist should be smart, obedient and, of course, cannot be aggressive. It must live in a family, that is to be socialized, and want to contact with people.

Antonina Hoshovska stresses that one dog for the treatment of all diseases is not suitable – a dog with certain knowledge and skills has to be chosen for each child and diagnosis.

Before starting therapy, dogs are tested. The test should be conducted by a doctor, a cynologist, and a third-party person – in order to estimate all the risks. In addition, the owner must follow the vaccination, de-worming schedule, give a bath to the dog before the exercises.

Olha Smirnova, an expert on the Hero’s Friend Foundation, who has been engaged in canistherapy since 2015, says that the most potential therapists are among the breeds of companion dogs: golden retrievers, labradors, french bulldogs, miniature schnauzers, curs, border collies. At present, about 18-20 teams of canistherapists? Cosisting of a cynologist and a dog, are engaged in the project.

Olha notes that even at a young age it is possible to understand, for what kind of canistherapy the dog is better suited, and the cynologist can help to understand this.

The project “Social Rehabilitation of People with Disabilities in the Transboundary Region through the Creation of Conditions and Training of Specialists in the Field of Canistherapy” was financed by the European Union under Belarus-Ukraine Cross-Border Cooperation Program in the amount of EUR 136,000. In Ukraine, this initiative was implemented in the territory of four oblasts: Volyn, Zhytomyr, Chernihiv and Kyiv.

Project participants prepared a manual on the training of dogs-therapists, trained specialists in canistherapy and gave classes on rehabilitation of children by this method.

“We have reading in libraries, and the dog’s task there is just listening to a child. When the child reads to a dog, it opens itself, because nobody criticizes it, nobody presses. And when the child sees that somebody follows it, listens to it, it immediately has the motivation to read further, if there is a listener” – Antonina tells.

Reading with dogs in libraries in Lutsk continues despite the completion of the project.

According to Antonina Hoshovskaya, not only residents of transboundary territories were able to participate in trainings for specialists – doctors, psychologists, educators and cynologists.

“We had 23 people from the border areas, and people who joined from other regions – Chernivtsi, Vinnytsa, Kharkiv oblasts. They implement canisterapy in their cities”, – Project Manager says. 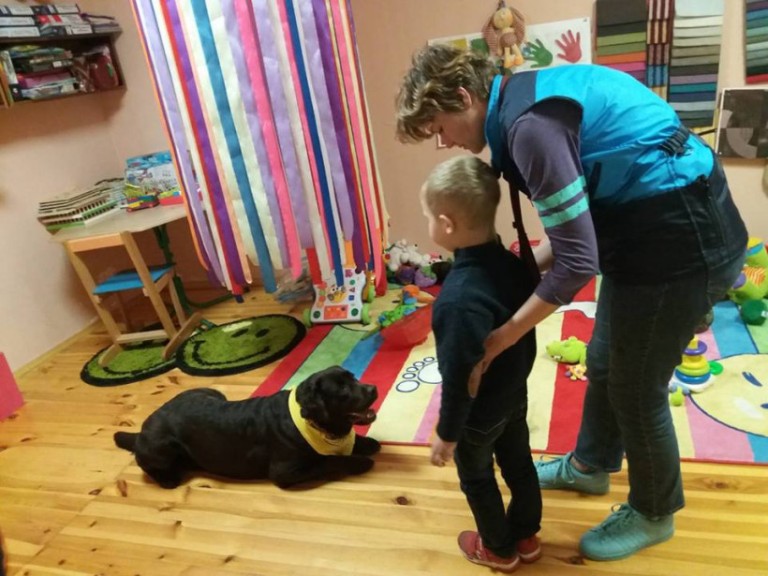 Recognition of the method by the state

But in addition to training of specialists canistherapy must be officially recognized. The Verkhovna Rada has to adopt a law on the admission of service dogs with attendants to hospitals, rehabilitation and education establishments. And the activities of dogs-therapists in these establishments depend on the decisions of the ministries.

For example, in Belarus canistherapy exercises are conducted with children in hospitals and rehabilitation centers, and in Poland dogs with attendants come to oncological hospitals. The method is officially recognized in Lithuania, Germany and Norway.

According to Hoshovska, project participants have also developed guidelines for canistherapy and submitted them to the Verkhovna Rada Committee on Health Care.

“We would like to receive support to certify dogs in Ukraine, and then develop training systems,”  – Manager tells on the prospects for continuing the project.

Anna Horoshko, Head of “Future” Rehabilitation Center for People with Disabilities, also draws attention to the need of canistherapy regulation in Ukraine. “Future” Center together with the Ukrainian Cynological Union has developed a canisterapy development programme in order to make the method recognized by the state and become more accessible to children who need it.

Currently, in Ukraine work dogs that have received a certificate abroad or those who are studying in Ukraine under different programmes. According to Horoshko, such a certification does not mean anything for the state.

“Therefore, we want that uniform standards are adopted in Ukraine. If there is no recognition at the state level, it will be either commerce or volunteering. Neither of them guarantees high-quality services”, – Anna Horoshko notes.