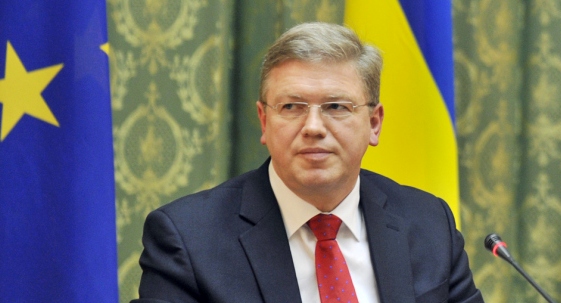 Štefan Füle, the European Commissioner for Enlargement and Neighbourhood Policy, visited Ukraine on September 19-20 to participate in the Yalta European Strategy Forum and discuss numerous issues with Ukrainian stakeholders, from the Association Agreement to the rights of Crimean Tatars. In his speeches, he made the following key remarks:

On the Association Agreement: “Time is not on our side but we are on a good track. The progress made on those benchmarks, particularly in the recent weeks and last few months, is unprecedented… I hope that the Verkhovna Rada will do its work and we will see the reflection on the benchmarks to go through the legislative process.”

“I hope we will be in the position to see the European Union and Ukraine signing the most powerful transformative instrument after enlargement – the Association Agreement/DCFTA. But with Vilnius it all starts, it does not end there”.

On Ukrainian politics: “Something remarkable has happened. Whenever I come to Ukraine I have always observed an uneasy relationship between the government and the opposition. Sometimes they even tried to involve me into this uneasy relationship. But something remarkable has happened: The cross-party consensus that was generated in Verkhovna Rada, the number of votes on Europe-related pieces of legislation, is unprecedented.”

We will be doing our utmost for the Association Agreement DCFTA not to be seen as a threat but as an opportunity, a contribution to creating the area of free trade between Lisbon and Vladivostok. Are we working on overcoming the issue of legal incompatibility between the Association Agreement and Customs Union? Of course we are. And the issue of incompatibility is not a geopolitical game, it is a practical issue. You expect a partner country that is entering a specific commitment to be able to deliver on its commitments. But how, by joining the Customs Union and passing part of your sovereignty over your external trade policy – can you deliver on this while your policy will be in the hands of the Eurasian Commission in Moscow?”

On Crimea: Crimea is a region of pivotal importance for the European Union’s engagement in its Eastern Neighbourhood. This is due, among other reasons, to

• its role in preserving the environmental stability of the black sea ;and

On EU priorities in Crimea: “Above all we need to invest in the human capital: education, the fight against poverty, prevention of diseases such as HIV/AIDS and TB, and the fight against marginalization and crime’.

On Crimean Tatars: As an observer of this process, my impression is that work remains to be done for the parties and stakeholders to reach concrete agreements and make compromise in order to create a genuine framework of an European type diversity in Crimea. I would therefore encourage all participants, both authorities and representatives of the Crimean Tatar people, to make efforts to ensure that an open and inclusive political process is in place. This means acknowledging both the importance of pluralism in the Crimean Tatar people, and the legitimacy and key role of such organisations as the Mezhlis of Crimean Tatars.

The initiative to hold an international forum, which has been presented today by Mr Dzhemilev deserves to be discussed and hopefully also agreed. The EU, the OSCE – based on the work already done – and other international bodies, as well as partner countries, may help Ukraine to address this challenge that Ukraine inherited from the USSR.