Concrete, cement, rebar, mineral wool, foam plastic. These are all ordinary words when used with regard to construction. Hemp is a less ordinary word, isn’t it? This is the story of a Ukrainian startup manufacturing building materials based on industrial hemp and already exporting its technologies abroad.

A building made from 100 cubic meters of concrete will emit into ambient air up to 20 tons of СО2 during the manufacture of that concrete itself. That’s how much, for example, a car will emit after traveling 100 thousand kilometers.

Eco-friendly, or “green” construction is different from the standard construction process by a much smaller amount of waste generated by manufacture of building materials, and also, by lesser energy consumption during construction, maintenance, renovation and demolition.

Hempire, a company manufacturing an eco-friendly building material based on industrial hemp, has been active in Ukraine since 2015. Its founder, Serhii Kovalenkov, is sure that over years, the fashion for “green” buildings will only spread across Ukraine:

“We are not the only company erecting eco-friendly buildings in Ukraine. There are companies building from common reed or straw. This area is very promising, because people began to think about what house their family and children should live in. We have to help each other, not compete.”

Industrial hemp shives, which in the past were regarded as fabric and rope production waste, can serve as a valuable building material and an alternative to ordinary insulation materials, such as mineral wool or foam plastic.

Items made from industrial hemp can be found in almost every home, from ordinary tow to paper. Up to 60% of hemp fibers are used in paper and cellulose production. Hemp seeds are actively used in the food industry, and oil in cosmetology. 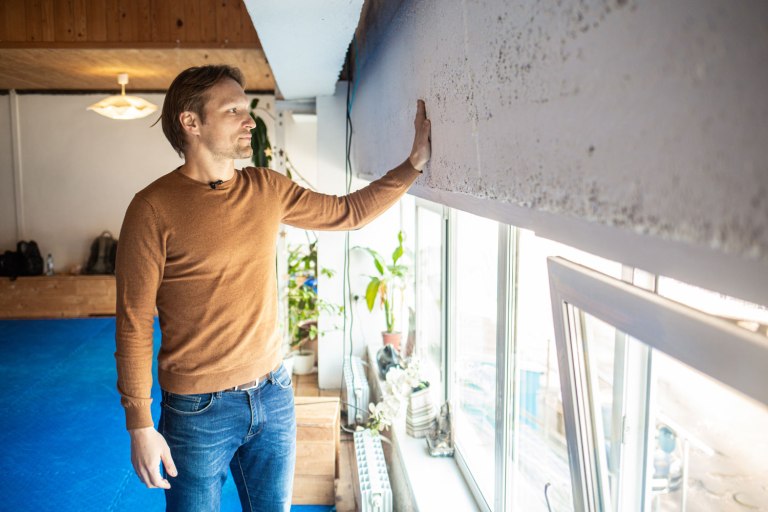 An industrial hemp-based building material can be molded into any shape and dries up fast, and the formwork (a temporary structure used to aid in the construction of buildings — editor’s note) can be removed in just a half an hour after the material was poured in.

In one year, hemp produces a greater increase of crop than a forest in 50 years, actively absorbing carbon dioxide. One hectare of growing hemp can absorb up to 10 tons of СО2 from the atmosphere.

Serhii Kovalenkov shows the photograph of one of the construction phases of a domed structure built by his team using an industrial hemp mix.

In the 1960s, hemp was grown on 100 thousand hectares of land in Ukraine. Later, the hemp growing area began to rapidly decrease due to the emphasis on the narcotic component of hemp. Back then, a number of regulatory documents restricting or altogether banning hemp growing were adopted in the world: the UN Single Convention on Narcotic Drugs of 1961, the UN Convention on Psychotropic Substances of 1971, and other.

According to data by Hlukhiv Institute of Bast Cultures, in the second half of the 20th century Ukrainian plant breeders became the first in the world to breed hemp strains containing almost no narcotic component (THC). This strain is now called industrial hemp.

Prior to 2012, industrial hemp growing conditions in Ukraine were some of the strictest in the world. Plantations had to be guarded, and because of that, production costs increased by 30%. Therefore, the growing area for this culture in Ukraine was reduced to 270 hectares. But in August 2012, the Cabinet of Ministers adopted a resolution that simplified the hemp growing conditions.

In 2016, hemp was grown on almost 5 thousand hectares, and this figure is gradually increasing.

In order to grow industrial hemp, Ukrainians must have a license and sow only the varieties filed in the State Register of Varieties of Ukraine. Today, there are 12 varieties of cultivated hemp in Ukraine.

Hempirе developed a material called Hempire-mix, which can be used in construction for insulation or instead of concrete and bricks. It is manufactured from broken industrial hemp stalks (shives), water and lime-based adhesive material, without using any toxic ingredients. In order to produce this insulating material, the ingredients must be quickly mixed up, the formwork installed around the frame elements, and the mix compacted to make it 10-15 centimeters thick.

What makes the Hempire-mix unique is the adhesive material that contains no cement, because hempcrete is already being used by various companies around the world, but it can be mixed using somewhat different formulas.

Serhii Kovalenkov graduated from Carleton University in Ottawa with a degree in civil engineering, and for several years he managed construction projects in Canada, the United States and Switzerland.

Serhii learned about construction from hemp in Australia, where he also helped build dwellings. Working with this material at various construction sites, Serhii gained experience and realized that he can develop an original recipe for this mix, without cement. When a hemp-based insulating material containing cement solidifies, it cannot be processed and reused (or it is very expensive to do). But a mix based on natural ingredients only can be crumbled, processed and added to another insulating mix.

“This is something I want to do in my life. I see that we can produce high-quality, energy efficient materials based on organic ingredients here in Ukraine. We were told once: “Why are you doing all that? Mix that hemp with cement, and everything will be fine!” But we chose another path, more painful.”

The company’s founder says that a hemp-based construction mix has many advantages. It is not only eco-friendly but also energy efficient:

“One of the advantages of these buildings is the ability to save on heating and cooling. This insulating material can adjust air humidity, accumulate heat and then release it. It is also a very efficient soundproofing material.” 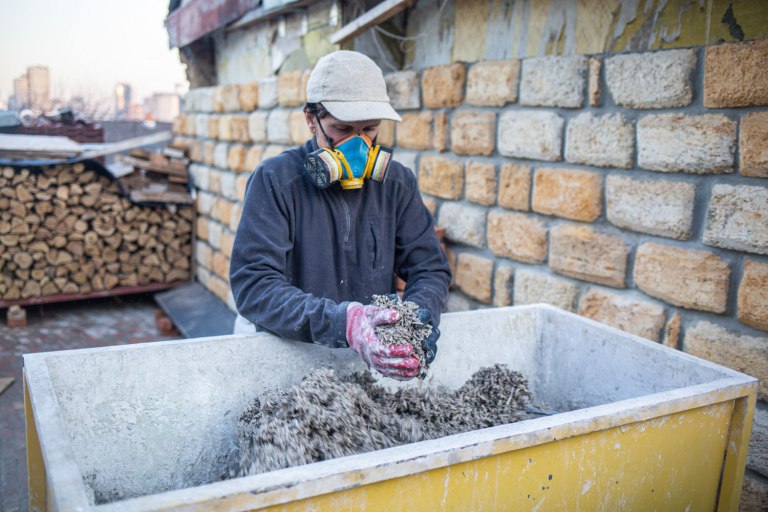 In Ukraine, this technology is relatively new, and therefore, the entrepreneur recalls that in the beginning, it caused questions and doubts:

“The first question asked by potential customers was this: “Do you have any projects already implemented in Ukraine?” And we had nothing to show them.”

As of the beginning of 2020, Hempire has already implemented close to 60 projects in Ukraine, the United States, Poland and Sweden. In California, they made a house on wheels from local ingredients using Ukrainian-made adhesive material.

“The hemp is Ukrainian-grown. From the very beginning, the objective was to build from domestically-manufactured products, in order not to be dependent on imports. The number of fields, as well as farms, in Ukraine is growing every year. In other words, there are no problems with hemp today.”

Hemp reduces the carbon trace even in the processed form, because the Hempire-mix continues to absorb СО2 even during solidification:

“We see that the insulating material petrifies with every passing minute, becoming stronger every day. And then, it turns into stone, which we plaster using lime or clay.” 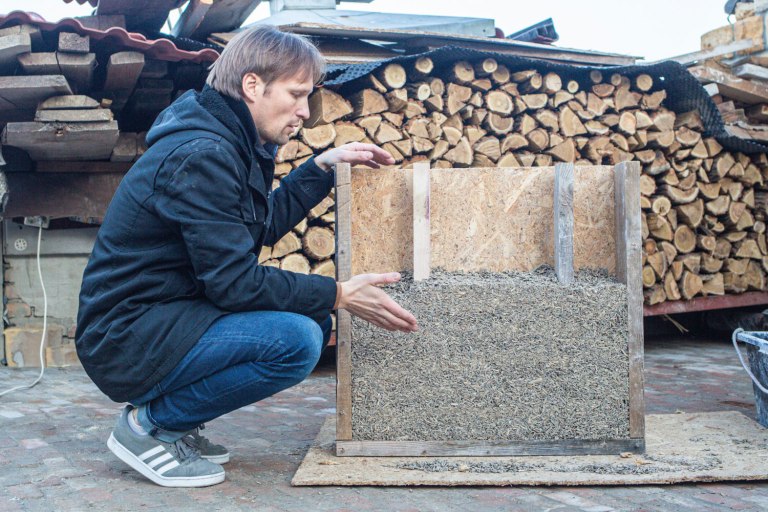 Hemp can be used to insulate façade, floor, foundation and roof of a building. This insulation will be suitable for private homes, as well as for offices, schools and kindergartens.

“We have plans to develop new building materials on the basis of hemp for insulation of apartment buildings. This is a very big problem in Ukraine: we have many concrete buildings which need to be insulated. We are already developing insulation slabs, and have ready samples.”

Thanks to the newest formula of a natural insulating material suitable for processing, Hempire received a voucher (financial support — editor’s note) for development of a “green” technology under Climate Innovation Vouchers, a grant program of the European Bank for Reconstruction and Development (EBRD) financed by the European Union. It will allow to procure certificates required to enter the local and European markets. Serhii Kovalenkov says that soon, their team will receive laboratory test protocols which they need to certify the insulating material.

“When gas prices started to climb, Ukrainians understood what energy efficiency is. After 2014, a lot of startups have appeared in Ukraine, particularly in this area. Our fellow citizens begin to understand that we can do everything by ourselves.” 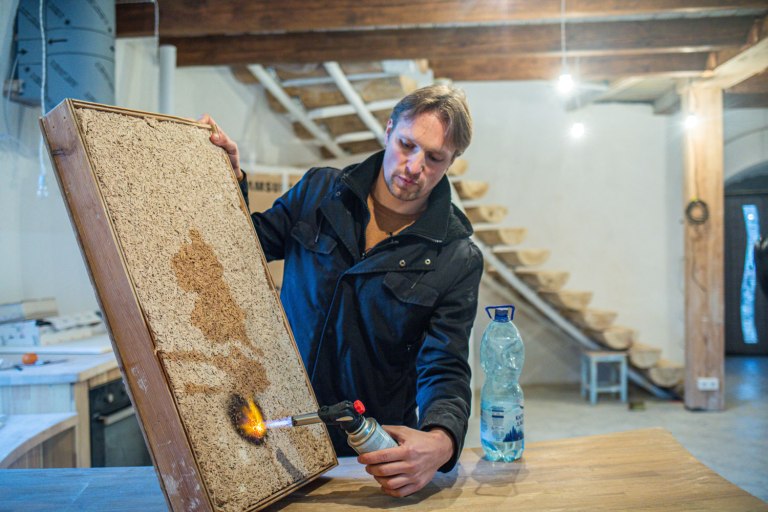 Dmytro Tereshchenko is one of Hempire’s first customers. He sought the company’s services to build the second story of his house using the new technology. Having lived in that house with his family for two years, Dmytro noticed the difference in insulation of the first and the second floors. The first floor is very cold, while the second floor retains heat for much longer.

“When I was building this house, eco-friendliness was of paramount importance for me. The second priority was comfort.”

The homeowner recalls that in the first phase of construction, he had doubts regarding the strength of this dwelling:

“In November, when we closed the second floor and the temperature began to drop below zero, I had some doubts. I was looking at the holes in the wall, and my wife was telling me: “It’s all right, we’ll foam-plastic all that, if need be”. But thankfully, we didn’t have to.”

Dmytro’s house does not have air conditioning, because according to him, the walls “breathe” and need no additional cooling. In addition, hemp walls indeed help save money: in a house of 150-200 square meters, one can pay for heating from an electrical boiler, in Dmytro’s words, up to 1000 hryvnias a month.

Serhii Kovalenkov says that hemp-based insulation can also maintain air humidity inside a house at 50-55% (with the optimal air humidity of 40-60% — editor’s note). 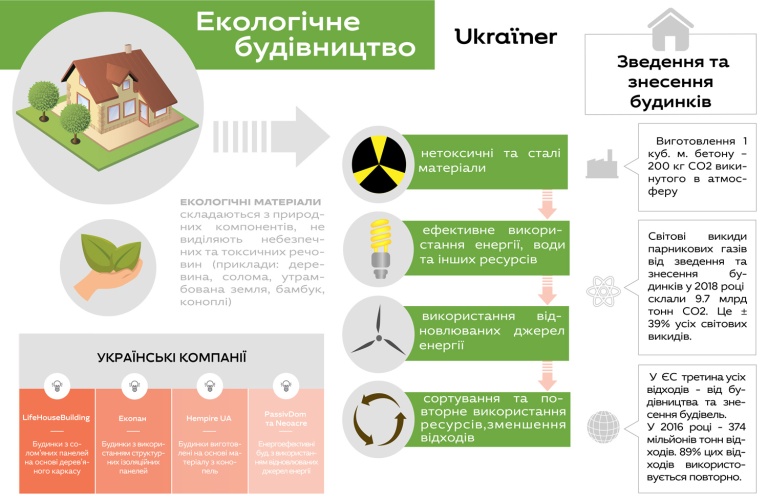 Domed buildings are a separate area in the construction of low-rise houses. Spherical construction in its present form was popularized in the 20th century by American architect Richard Fuller. A building shaped as geodesic cupola is created thanks to a special joining of beams, allowing to increase the space while retaining the structure’s minimal weight.

Serhii Kovalenkov says that Hempire was the first to try the construction of domed dwellings from hemp, and these buildings are now enjoying demand abroad.

Serhii Boiko, one of Hempire’s Ukrainian customers and the owner of a domed house in Kyiv, recalls that he began thinking about this project back in 2009. He also works in the construction industry, and started to take interest in ecology when he ran a business selling organic foods:

“I was thinking solely in terms of health. I have four children (all daughters), and they inspire me for something fabulous. Some time later, I realized that shape is good but my walls are not eco-friendly. Therefore, the question was: where to find an eco-material? Everything I could come across was cement-based.”

According to Serhii Boiko, a hemp-insulated building keeps temperature steady for one hour without additional heating. A 30-centimeter layer of heat-accumulating insulation made from natural materials allows to save on heating.

Serhii Kovalenkov says that this dome building project is unique, because it stands at the crossroads of two technologies:

“One dome was built from polystyrene concrete (a variety of light concrete — editor’s note), and the other dome from industrial hemp. It’s a very symbolic building, because Serhii has a construction company, so when he learned about our technology he built the second dome using natural materials. In other words, we pulled him to the side of goodness and light, to the side of hemp.” 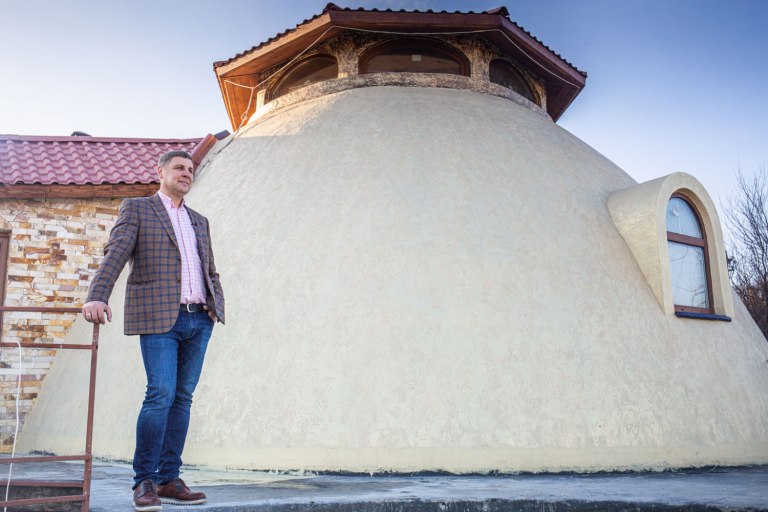 Serhii Boiko recalls that a hemp mix turned out to be more expensive than conventional building materials. But despite the questions from friends: “Why pay more?”, the homeowner decided to give this mix a try in view of long-term prospects:

“If we look at it in a short term only, there will be no questions. But what about children? I could live somehow for a while, but what’s next? What is that: the father built a great house but from nothing but ordinary materials?”