In December 2019, Anastasia Gudilianova, a fourth-year student of Yuriy Fedkovych Chernivtsi National University, took part in an international project to confront populism in Georgia under the EU Erasmus+ programme. Together with other students from Ukraine, Georgia, Armenia, Belarus, Poland, Spain and Germany, she learned to recognize populism and conduct peacebuilding trainings to prevent conflicts in society.

The participation in various student exchanges and programs helps gain new experience, learn about the latest foreign teaching methods and, finally, increase one’s own competitiveness in the labor market after graduating from a university.

During 2019, 839 Ukrainian students studied in EU states thanks to Erasmus+ international credit mobility programs. A 0372.ua correspondent talked to a participant of one of these programs, a fourth-year student at Yuri Fedkovych Chernivtsi National University. In September of last year, Anastasia Hudylianova and another two Ukrainian students passed a selection contest for Youth and Populism project financed by European partners. In December 2019, she attended an international training laboratory of combating populism in Georgia.

Youth and Populism project brought together 24 young men and women from all over Europe, who learned together to identify populism and combat its consequences in their communities. This project was implemented by Diplomatic Center CSO. The rapid growth of populist movements in Europe and other parts of the world gave impetus to the launch of this program. These movements have their roots in discourses often related to national identity, ethnicity and values. Since I’m majoring in international relations, this topic became interesting to me and prompted me to apply.

Our interlocutor says that the main goal of this project was to enhance the competence of young people (in particular, students) in carrying out peacekeeping educational campaigns which strengthen resistance of the youth to radicalization and social polarization and promote their public activity.

In today’s conditions of the Ukrainian-Russian war, the topic of peaceful upbringing of the youth has simply captivated me, and therefore, I did not hesitate as to whether I should try to take part in this project. Especially since public activists need the skills of effective response to the growing social polarization and radicalization using educational instruments. For today, there are fundamental differences in societies of the EU and the Eastern Partnership region as regards this problem. 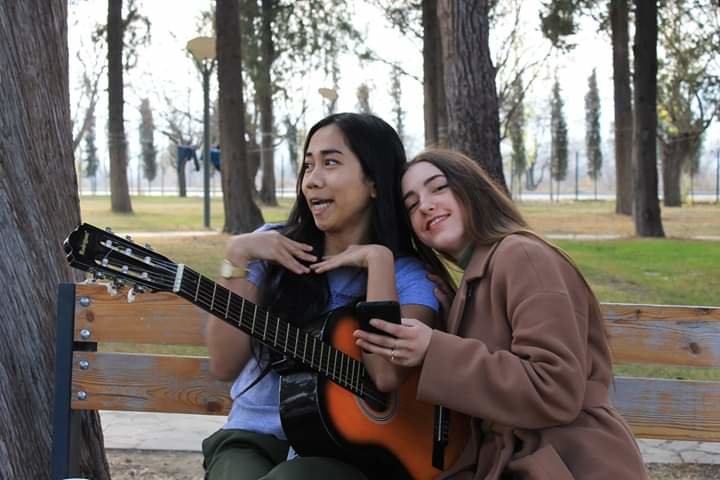 The project consisted of two training phases, the successful completion of which enables participation in the subsequent phases, which include development and implementation of own projects.

In the first phase, all selected participants from seven countries underwent an online course in peaceful upbringing. This electronic course covered mostly competencies in “Designing education for peace”, and consisted of five modules with thematic English-language literature and knowledge tests. Since my level of proficiency in English is quite high, there were no big difficulties in this phase. The second phase was incredibly informational and captivating. It took place in Rustavi, Georgia from 09 to 17 December 2019.

Anastasia spoke with great enthusiasm about Georgia and her impressions about this country, people, the project’s participants and the studies per se. Our interlocutor also said that 24 participants from the EU and the Caucasus studied peaceful upbringing.

The participants represented such countries as Georgia, Armenia, Ukraine, Belarus, Poland, Spain and Germany. In a short time, our international team was able to take numerous trainings in how to successfully combat violence, radicalization and extremism and in understanding peace and conflicts, and received an opportunity to create and develop our own project in building peace. In addition, the organizers offered captivating sightseeing tours of Tbilisi and intercultural evenings.

“The participation in Erasmus+ projects and programs is undoubtedly useful for gaining the necessary knowledge and experience in communication, exchanging opinions, and understanding the needs and realities of life of foreign students,” Anastasia sums up. It is what unites the seemingly different worlds and education spaces.