Monitoring of actions of the police, the prosecutor’s office, and courts in relation to the investigation of election crimes are among the main tasks of the electoral ombudsmen.

Three years ago during the local elections, the observers of the Civil Network OPORA recorded a massive photographing of ballot papers at the polling station in a student camp in Chernivtsi. As it turned out, students were offered 300 to 450 hryvnias for voting for the “Ridne misto” (Native City) party and a candidate for deputy to the Chernivtsi City Council, Rostyslav Bilyk.

Law enforcers initiated criminal proceedings under Article 160 of the Criminal Code of Ukraine (“Vote buying”). Bilyk’s apartment was searched, he was put on the wanted list, but he was already outside the country.

The Bilyk’s case continues to this day.

The “Election Reform for Enhancing the Impact of Agents of Change and Supporting Public Dialogue” project was launched with the support of the European Union almost a year before the nationwide election, and it is implemented by the Civic Network OPORA together with the Ukrainian Catholic University and the European Centre for Electoral Support. The project aims at protecting the electoral rights of citizens through reforming legislation on parliamentary and local elections and establishing a network of public ombudsmen throughout Ukraine.

“Free and fair elections are the basis of the democratic transformation. A comprehensive reform of electoral legislation is one of the key reforms that Ukraine needs to implement. It is extremely important for this to be done once and for all and prior to the next round of elections in the country, so that the rules of the game could be improved by that time. Meanwhile, improving the protection of electoral rights and interests of Ukrainian citizens, in particular, through a network of electoral authorised agents in the regions, will help to reduce the space for political corruption and improve the integrity and trust in the electoral process in general”, said Hugues Mingarelli, Ambassador, Head of the EU Delegation to Ukraine.

Bringing cases to court is a rare achievement

The statistical data concerning the cases related to violations of citizens’ voting rights brought to court are disappointing.

“Bilyk’s case” is one of the few examples of bringing criminal proceedings to court. However, such a result could not be reached without vigilant public oversight. 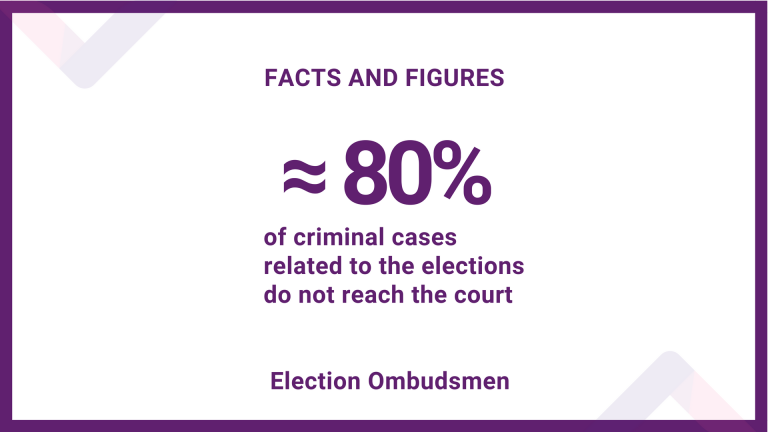 The reasons for this are as follows: imperfection of legislation, incompetence and political bias of the law enforcement agencies; but most importantly, citizens themselves rarely go to the police if their electoral rights are violated.

Agents of change are needed. The work on the establishment of the Network of Public Ombudsmen for the Protection of Electoral Rights, which will operate in all regions of Ukraine, has begun within the framework of the project.

The Civil Network OPORA has already conducted the selection of ombudsmen looking for unbiased, competent, motivated people who will act as communicators between voters, candidates, mass media, and the law enforcement agencies.

Monitoring of actions of the police, the prosecutor’s office, and courts in relation to the investigation of election crimes are among the main tasks of the electoral ombudsmen. Moreover, they will develop recommendations for improving electoral legislation and provide advice on the protection of electoral rights.

In addition, ombudsmen themselves will give coverage to the investigation processes, offer informational co-operation to the regional media, and encourage hromadas (communities) to be more interested in the electoral process.

However, they will take specially developed professional coursesprovided by the Ukrainian Catholic University before that. Upon completion of the training, the Network members will receive an official certificate of the School of Public Ombudsmen for Electoral Rights and will be officially introduced in the regions.

It will be based on the Code of Conduct to be developed by OPORA jointly with the Ukrainian Catholic University. The Code will, foremost, include the guarantees of the impartiality and political independence of the ombudsmen as well as highlight the main functions and procedures of their activities.

“According to the results of the oversight implemented by OPORA, the electoral subjects massively violate the law, but only a few of them are held liable. Approximately 70-80% of the initiated criminal proceedings do not reach the court. If perpetrators of crimes are sometimes held liable, the initiators almost always escape the liability. The absence of sanctions for violating electoral legislation is one of the key issues in Ukraine.

It is necessary to implement an election reform before the elections 2019-2020. The Venice Commission, monitoring missions, and expert organizations recommended Ukraine to use a proportional electoral system with open lists. This will significantly reduce political corruption and increase responsibility and professionalism of the elected bodies at the local and national levels”, said Olga Aivazovska, the chairperson of the Civil Network OPORA.

Only a set of measures can give a tangible result; therefore, the project also intends to increase transparency and accountability of electoral administrations, to prevent unlawful influence on the results of the will of the voters, to introduce open source data services, to study the specifics of elections in conflict-ridden areas, etc.

With allowance for the practice of using administrative resources during elections adopted by the country, high level of political corruption, and the lack of professionalism of the electoral administration bodies, the society has a great demand for the electoral reform.

The article was originally published on EU Prostir