A conflict in the east was a blow to the whole Ukraine. Donetsk and Luhansk oblasts split into two parts. More than a million Ukrainians left the uncontrolled territory. First of all, they moved to the nearest cities, closer to their homes.  Internal migration became an impulse for the development of many small towns in Donetsk and Luhansk oblasts. The International Organization for Migration and the European Union provided 2,500 internally displaced persons with grants for business development as well as professional and technical assistance. Thousands of Ukrainians in the east of Ukraine received an opportunity to make their dreams come true.

Small and medium-sized enterprises are the backbone of the economy of any country and any city. Small enterprises regularly pay taxes, create jobs and give an impulse to the development of a city. As early as in 2014, the EU and the International Organization for Migration opened special programs for the development of private business in the controlled territory of Donetsk and Luhansk oblasts.

For example, any local resident or IDP can receive a grant to open his own business. Moreover, unlike the credit, it is not necessary to refund the money. A grant of up to UAH 250 thousand can be received by a Ukrainian who came up with an idea and laid it out in a business plan. Very often local authorities in such cities help develop a plan and simplify the procedure for registration, searching for premises, etc. These can be coffee shops, tailoring shops, garden shops, hairdressing salons and cheese-making enterprises. In general, almost any small business.

One of these grants was also received by Liliia Zhurbei. The Ukrainian dreamed of her own beauty salon but the conflict in the east made its own adjustments. When Liliia found out about a possibility to get a grant, she decided to try it. She wrote a plan, submitted documents and soon opened her own beauty salon. Liliia spent money on tools and equipment for the salon. Today, a couple of hairdressers work at her Beauty Shop in Druzhkivka, Donetsk Oblast. The salon not only changed the Liliia’s life but also gave job to local residents. And being inspired by a successful start, the businesswoman is already thinking about how to expand her business.  Grant is an impulse that gave the opportunity to start. Currently, the owner of the salon successfully works and earns.

“Make life beautiful around you” is the unofficial slogan of Liliia’s business. Thanks to such Ukrainians, life in Donetsk and Luhansk oblasts is changing. Any difficult situation may become a start and open up new opportunities. And any Ukrainian can contribute. For example, with the help of a grant to open their own business, create jobs and improve any of the spheres of life in their city. Sew quality clothes, improve the service industry or just make delicious coffee and honestly pay taxes.

Hundreds of thousands of Ukrainian families were left without a home, work and even their stuff. In a new place, they have to start all over again. Local authorities in all cities of Ukraine provide such families with housing, food and stuff. The international community does not stand aside either. Thanks to the EU, Donetsk and Luhansk oblasts are among the leaders in the number of open new small enterprises.  Grants can be obtained right now – a good idea, a business plan and a desire to work are everything it takes to change your life.

Without corruption and queues: how modern administrative service centers work

Bureaucratic obstacles stop many Ukrainians on their way to opening their own business. Moreover, this is also the main brake on economic reforms, in any case, according to the survey of Democratic Initiatives Foundation. It is impossible to defeat the bureaucracy in a short period, but it is possible to simplify the life of Ukrainians. Provided the financial support of the European Union program U-LEAD with Europe and the United Nations Development Programme, hundreds of Administrative Service Centers (ASCs) have already been opened in the country. 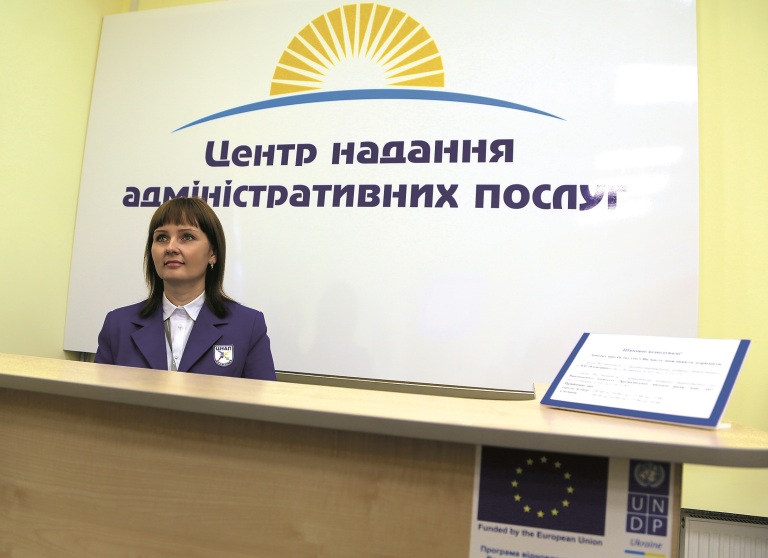 ASC is an intermediary between the state and the citizen. It is one place, where you can get dozens of administrative services, from registration of business, passport, land and ending up with a subsidy for utilities. Officers of the center undergo special training. They not only accept documents and advise citizens, but also monitor how quickly the authorities fulfill their obligations.

The Ministry of Economic Development and Trade recommends that at least 120 services are provided in these centers. This should simplify the life of Ukrainians – you can take a queue in the center online and receive some services electronically. In addition, such centers often do not leave room for corruption. Communication with officials takes place through the specialists of the center; you can monitor all procedures online.

For example, if parents turn to a kindergarten trying to arrange their child in a group, they can be told “no free places”, but parents cannot check whether it is true. In the center you cannot only submit documents to a kindergarten, but also check the statistics. Find out in which kindergarten there are free places and control how the queue progresses. If parents submit documents through ASCs, a director of a preschool institution no longer has a chance to deny without valid reasons.

Electronic information terminals are often installed in such centers. Pressing a few buttons, selection of a required question, ranging from utilities and to registration of business, and the terminal prints out a voucher with a position in the queue. This information is displayed on a general digital signage. And on average, it takes about 5 to 10 minutes. Such centers are equipped and open for the EU money. Most recently, modern ASCs have been opened in Druzhkivka, Donetsk Oblast. Ten more centers will be opened with the help of the EU in the east of the country.

In future, such ASCs will be able to provide all administrative services. The centers will become a “single window” between Ukrainians and officials.

And these are just a few programs aimed at helping residents of Eastern Ukraine. In addition, the European Union provides targeted aid, helps IDPs get education abroad, continue studying for those who stayed in the uncontrolled territory. The main task of humanitarian missions is to enable Ukrainians, who found themselves in difficult circumstances due to the conflict, to forever change their lives for the better. Get a good education, open their own business, easily receive administrative services and not stand in long queues for a subsidy or passport.

The original article is published by Segodnya (print version)