Before 2017, only 6% of court judgments in civil and commercial cases have been enforced in Ukraine. During the last year, this figure rose to 18% thanks to reform of the court judgment enforcement system, which saw the advent of private enforcement. Segodnya tried to look into all nuances of this reform with the help of Communication Europe in Ukraine experts.

Many years of attempts to improve the State Enforcement Service (SES) bore no fruit. In 2017, 5 thousand enforcers were overwhelmed with 4.1 mln cases. If the whole pile were to be divided among all of them, every specialist would have had to enforce 3 cases a day! Such a huge workload combined with low salaries and personnel turnover rendered SES inefficient. To find a way out of the dead end, a working group under the Presidential Administration was established in 2015. It included representatives of the Justice Ministry, experts of the EU project “Support to Justice Sector Reforms in Ukraine” (PRAVO-Justice), representatives of the Center for Commercial Law (USAID).

Borrowing from the EU experience, the team made a decision: we need a mixed system of enforcing court judgments, when state and private enforcers compete with each other. In other words, a citizen or a company holding an award of court decides at own discretion whom to go to with an enforcement writ: to a private enforcer or to a bureaucrat. The workload on the latter decreases, which means that the backlog of unenforced cases really can be reduced. In turn, private enforcers close cases faster, supplying the budget with tax revenues.

In the EU, where private enforcement is legal, at least 30% of court judgments are enforced. Examples to follow may include Belgium, the Netherlands, France and the United Kingdom. This approach also helped solve problems of our Eastern European neighbors, where the post-Soviet system of enforcing court judgments “excelled” with low indicators. Today, private enforcers operate in the Baltic States, Czech Republic, Poland, Georgia, Moldova and other countries.

“Lithuania is a telling example. Per government decision, all state enforcers have turned private overnight. Surely, there was a procedure of confirming qualification, and not everyone was able to work in the new conditions. For being a civil servant and a person working for himself are different things”, Iryna Zharonkina, an expert of the EU project “Support to Justice Sector Reforms in Ukraine” says.

Private enforcers are too few yet

The Justice Ministry announced the hiring of enforcers in early 2017. Over a thousand candidates underwent training. 123 of them passed the test, but presently, only 100 persons actually do this job, 33 of whom work in Kyiv. That’s because of the selection procedure, which is very complex and expensive.

According to the Profession Admission Procedure, before taking the text, candidates are required to complete a monthly course for a UAH 6.1 thousand fee. Those who do not have one year of experience working as a state enforcer, lawyer, notary or receiver undergo a free one-month training at the State Enforcement Service. The candidates have to pay the costs of staying in the region of training themselves. Then goes a qualification test. A person receiving a certificate of private enforcer is required to open an own office and pass a check by the Justice Ministry: the office must have window grates, security alarm system, a safe, and metal cabinets to store documents and stamps. Only then could an enforcer be filed in the Unified Register of Private Enforcers of Ukraine and start working. But on top of that, a private enforcer has to insure his liability for possible damages to third parties. The insurance premium starts at 800 UAH, and depends on the amount to be collected from a debtor.

“Orders didn’t start piling up right away. The clients felt certain distrust. Some public bodies and banks didn’t take us seriously in the beginning, either. But as soon as they saw first happy collectors, the trust in this institution began to grow. People started to come to us more often”, Kateryna Schmidt, a private enforcer from the Kyiv District says.

In addition, private enforcers had to prove that they are not debt collectors. “Ask a passerby what he heard about court enforcers. Most likely, he would say: “These are the people who take property away from debtors”. Wrong. An enforcer does not take something away from a debtor, but returns it to the rightful owner”, private enforcer Andrii Avtorgov stresses.

As a reminder, debt collectors are outlawed in our country, and their “activity” falls within the scope of Article 182 of the Criminal Code “Violation of privacy”. Private enforcement, on the other hand, is regulated by the Laws of Ukraine On Enforcement Proceedings and On the Bodies and Persons Enforcing Court Judgments and Resolutions of Other Bodies.

It is worth noting that private enforcers prefer handling commercial disputes and enforcing particular obligations. Still, an enforcer may help an ordinary person withdraw a bank deposit under a court ruling, collect alimony, outstanding wages or insurance indemnity after a road accident, or demand compensation from a neighbor who flooded his apartment. They have the same authority as SES, which means that private enforcers can arrest property and bank accounts, charge fines to debtors, apply for a court-mandated restriction on foreign travel. 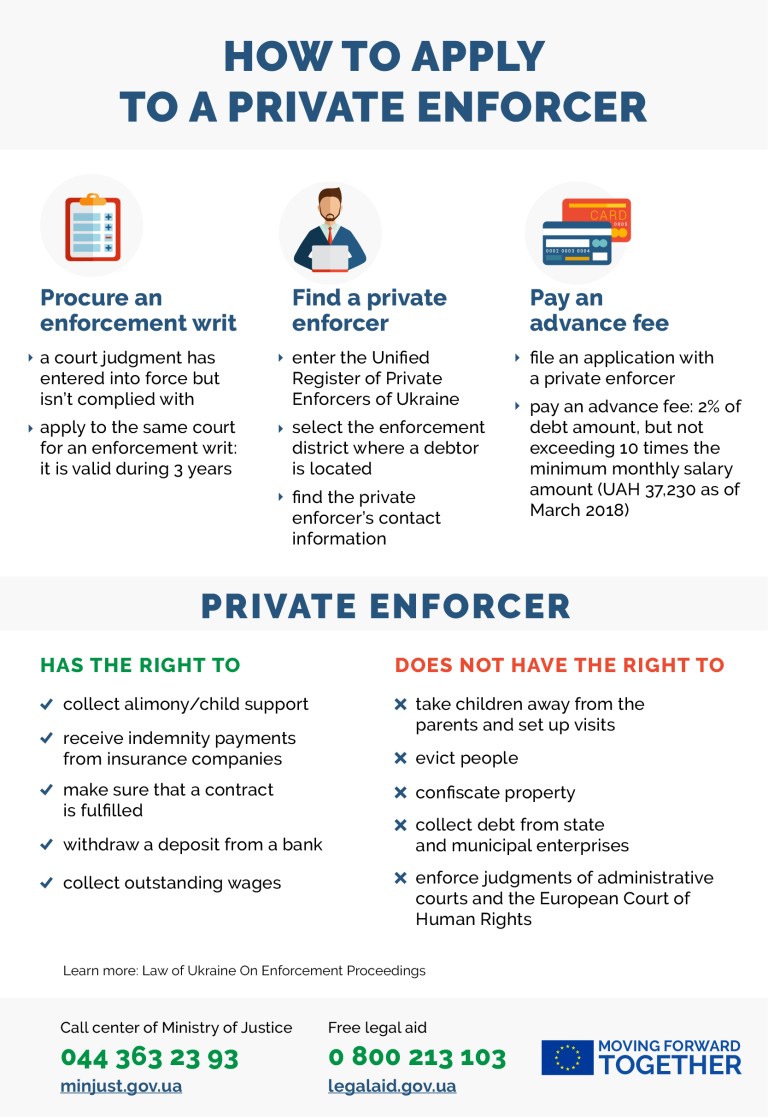 Private enforcers save taxpayer money, because unlike SES, they have motivation to enforce a court judgment faster. It bears upon their earnings: 10% of collected amount or of the value of returned property. And when they have to enforce a nonproprietary ruling, for example, a court order to publish a refutation of a statement, the amount of enforcer’s fee is fixed: two times the minimum monthly salary amount (UAH 7.4 thousand) payable by an individual and four times (UAH 14.9 thousand) payable by a business. In complex cases, enforcers may charge an additional fee. From his income, a private enforcer has to deduct taxes and office maintenance, inquiry handling and labor costs (totaling 41.5%).

“A private enforcer organizes enforcement himself. He is always in touch, for collectors are his clients, and a debtor can be received during off hours. We must be efficient – it’s a question of profitability”, Oleksandr Sivokozov of the Council of Private Enforcers of Ukraine notes. And experience proves it.

There are several things that obstruct implementation of the reform. Equal competition between private and state enforcers must be in place. A case may gather dust at SES for years, and it is difficult to transfer it to a private enforcer, because the transfer procedure is still being prepared.

“There is no fair competition yet. For a successful reform, we need more enforcers and normal working conditions”, Dovidas Vitkauskas, PRAVO-Justice Project Manager believes.

Then, there are problems with financial limitations. The law limits the amount that can be collected in one case to UAH 20 mln per year.

Another problem is evasion by debtors. Experts note that banks sometimes deliberately ignore resolutions of private enforcers, helping large customers transfer money to other accounts. Courts often obstruct the enforcer’s job. “The larger the liabilities are, the more efforts debtors make to evade them. They file, themselves or via third parties, bogus complaints with courts, which then prohibit enforcement of other courts’ judgments”, Oleksandr Sivokozov says.

Still, despite all problems, the Justice Ministry wants to reach, in 3-5 years, the EU’s average percentage of court judgment enforcements: 50-70%. But for that, experts believe, we’d need 1-2 thousand private enforcers.

The original article is published by Segodnya