Ukraine is now adapting its food safety system to the realities of the market economy and European norms. We talked to Tony Wheale, the team leader of the EU-funded ‘Improvement of Food Safety Control System in Ukraine’ project, and Yana Dobidovska, the project’s deputy team leader, about the differences between the old and new systems, changes already accomplished, and the way forward. Here are the highlights of our conversation.

The state cannot ensure food safety in a market economy; only business has this ability. During Soviet times, Ukrainian government-run enterprises raised livestock, grew crops, processed them into food, and sold them through state-owned shops. In a market economy, it is not the state, but private businesses that produce, process, and sell food. Private enterprises are more knowledgeable about the specifics and hazards of their products and are thus better equipped to be responsible for their safety.

Ukraine is now adapting its food safety system to the realities of the market economy and aims to make it more like the EU system. This process is a requirement of the EU-Ukraine Association Agreement. The EU is providing Ukraine with technical help due to the enormous scope of this work. This assistance comes specifically through the EU-funded project, ‘Improvement of Food Safety Control System in Ukraine.’

Ukraine is implementing a food safety system based on HACCP (Hazard Analysis and Critical Control Point). Now all food producers will be required to identify all potential risks associated with their production processes and facilities and take all necessary steps to minimise these risks. 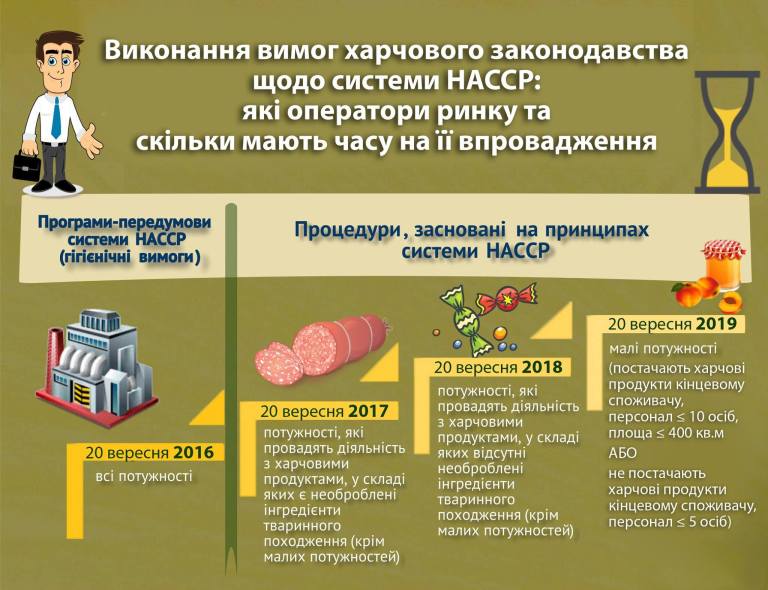 This increase in responsibility comes together with more freedom for businesses. The state cannot demand that a factory have light-coloured walls at least 1.8 metres high, for instance, but it can require non-penetrating, non-toxic, washable walls. It is up to the producer how the standards will be met, and what colour, height, and composition the walls should have.

State control: one egg does not represent the whole box

The new system requires a new food safety control mechanism. It is not enough for a state inspector to just test a sample like it was during Soviet times. When a state inspector takes one egg from a box and sends it to a laboratory for a test, it can tell you whether this particular egg is safe, but what about the other eggs in that box? So under the new system, the inspector’s job is to determine whether the eggs are produced in safe conditions and all hazards are minimised. This is the only way we can be sure that all eggs produced in this factory are as safe as possible 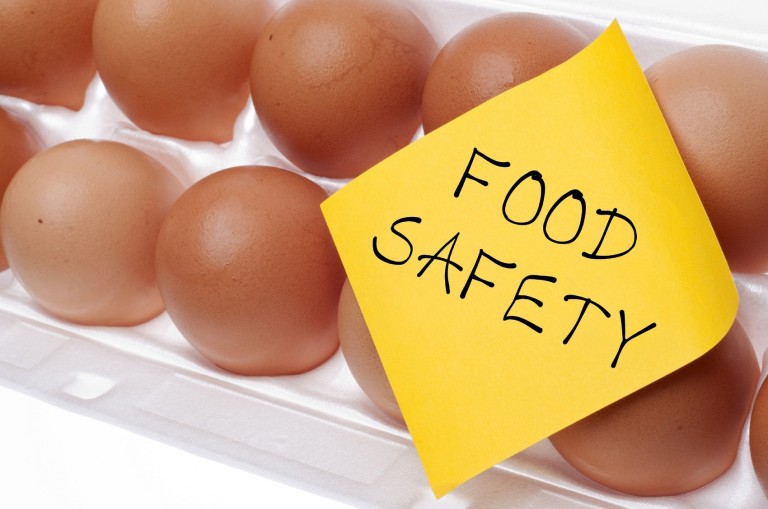 The relevant law, ‘On State Control over Compliance with Legislation on Food Products, Feeds, Byproducts of Animal Origin, Animals’ Health and Welfare,’ was adopted in May 2017 and comes into force beginning in 2018. Experts from the aforementioned EU project participated in the development of the legislation and are also training Ukrainian state inspectors on how to do their jobs according to the new law. Already, 319 inspectors out of 500 in the country have successfully passed the exam and have been evaluated by an independent third party.

Under the new system, Ukraine has established just one food safety institution – the State Service of Ukraine for Food Safety and Consumer Protection – rather than its multiple predecessors: the State Veterinary and Phytosanitary Service, the State Inspection for Consumer Protection, and the State Sanitary and Epidemiological Service. This means businesses will only have to deal with one inspector, resulting in significantly less bureaucracy for producers. This system is also simpler for the state since it only has to manage one institution.

Safety is not quality

Ukrainians often ask, ‘what is the quality of this product?’ The EU food safety system that Ukraine is adopting, however, takes a different perspective. It focuses more on safety than on quality. Quality is a subjective and personal notion that might consider things like taste or fat content. Safety requirements, on the other hand, aim at preventing health problems resulting from consuming a food product.

At the same time, the EU system also recognises that consumers should be aware of what they are eating. The Ukrainian parliament is currently considering a draft law on food information for consumers that would require that producers clearly list the content of their products. This list should be visible and veracious and reflect the real quality characteristics of the product

From farm to fork and traceability

It is not enough to minimise hazards during food production. If milk is produced in safe conditions, but is stored in a shop at too high a temperature, it can spoil. In such a case, it is not the producer who is responsible for the compromised food safety. Ukraine is now transitioning to a food safety system where every business along the production chain is responsible for a product’s safety, from farm to fork: the producer during production, the transporter during transportation, and the shop during storage. 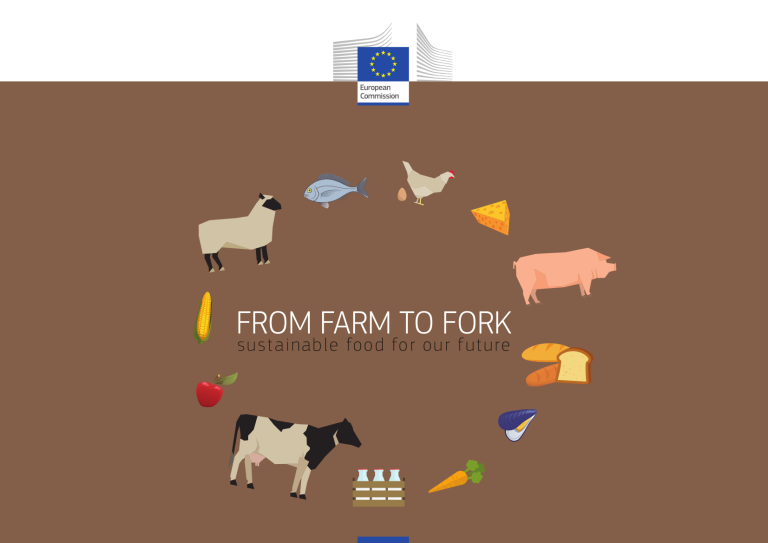 At each point along this chain, business must be aware of where the raw material or product came from and where it is going. If a customer consumes a dangerous product, this system will help to determine which point in the chain is responsible.

One thing that can’t be overlooked in this system is animal feed. A draft law on feed safety and hygiene is already registered in the Ukrainian parliament. If feed contains hazardous substances, these substances can get to our bodies through meat products. Therefore, feed safety is vital for people’s health.

According to the new system in Ukraine, the frequency of state inspections depends on how risky the business is. For instance, pig breeding, butchering, and meat production have more potential hazards than selling tea, coffee, and candies.

The number of inspections is also determined by reputation and track record. If a business has a long record of breaches, the inspector will visit that business more frequently.

Some entrepreneurs might consider all these changes too costly, and see the new rules as too complicated. This is a common reaction to change. But for a high-risk enterprise like a big meat producer, for instance, it will likely suffice to hire just one more person to develop and implement the HACCP principles. This person must understand both HACCP principles and the business processes of that particular meat factory.

For a coffee shop, and other low-risk businesses, the transition is even simpler. They need to keep receipts from purchases of milk, coffee, and other food products. There is no need for a complex system.

Without sanctions for violations there is no incentive to adhere to these new standards. That’s why the new food safety system in Ukraine establishes huge fines for non-compliance. In extreme cases, an enterprise that violates these standards can be forced to close down.

The main challenge in introducing the new food safety system in Ukraine is the various interests at play. Food safety is a realm in which many private interests are intertwined. The new rules of the game might leave some businesses in a less favourable position than under the previous system. If they play unfairly and breach laws, they could produce a cheaper product. For this reason, the process of adopting these laws is slow. The law on food safety control, for instance, was discussed for more than five years. But there are producers who are interested in a fair game and there are obligations under the EU-Ukraine Association Agreements. All this helps to push the reforms forward.

The EU-funded project ‘Improvement of Food Safety Control System in Ukraine’ has been running since March 2014. Experts from both EU countries and from Ukraine are working on the project. Among other things, the initiative is helping draft laws to approximate Ukrainian legislation to EU norms of food safety and control,  improve risk assessment capacity for businesses,  train state auditors, and enhance a national information and data management system.