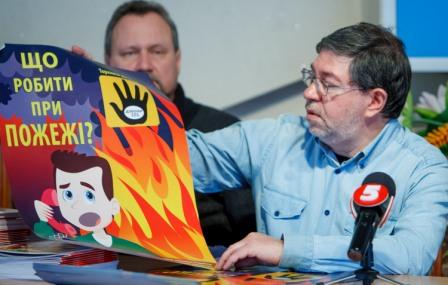 In our interview, Volodymyr Kuznietsov, communications expert with the EU-funded Programme for the Prevention, Preparedness and Response to Man-made and Natural Disasters in the ENPI East region (PPRD East) speaks about the European experience of volunteerism for the safety of the community in times of big natural catastrophes and man-made disasters.

–          Let’s talk about the social role of volunteerism. If services and specialists exist for solving all kinds of problems, why involve citizens?

The number of serious incidents and catastrophes – both man-made and natural – is increasing in Ukraine. Usually disaster relief workers see the population either as victims or as a factor that only hinders and complicates their work. Meanwhile, European experience has proven that the population is a huge resource that should not be ignored. In EU member states, hundreds of thousands of people work as volunteers in addition to their everyday jobs as teachers, doctors, etc. These people are sufficient in number to provide significant support to relief services if needed. Trained volunteers can detect early signs of danger in time to possibly prevent it. They can participate in rescue activities and independently organise to mitigate damage. In addition to the direct benefit to the local community, social volunteerism is advantageous for volunteers themselves and the country as a whole.

From this point of view, the Austrian experience is especially interesting. An ordinary Austrian can undertake the role of fireman, for example, in addition to his or her regular job. In a small town, there might be no fire station, but there is a fully-equipped fire fighting vehicle and specially trained team of volunteers that, in case of emergency, could use it properly. In this case, the citizens can choose to fight the fire themselves, rather than wait for help while incurring more losses and damage. Moreover, this system helps by saving significant financial resources on the salaries of firemen. Such a system works efficiently without excessive expenditures and with minimal waste.

–          You have said that volunteerism is a widespread phenomenon in Europe. What motivates people to volunteer, especially when there is no immediate danger?

Their motivation is very simple: “We live here.” Of course the possibility of danger, for instance a threat of flood or fire or the proximity of a harmful factory, is also an important motivation. For example, inhabitants of a small Italian town called Qualiano, which suffers from frequent floods, fully understand that when “big water” comes, a team from Genoa may arrive too late or provide insufficient assistance. Therefore, the people organise themselves voluntarily in order to minimise losses and protect people. So volunteerism has already become a part of the culture and worldview of their community.

Additionally, government can encourage citizens to get involved in public activities. In Germany, there is a state volunteers’ support programme, which means that volunteers enjoy incentives and pay low taxes. All volunteers can take part in free training sessions where they acquire the skills they need to prevent and react to emergencies. Thanks to this programme, there are people living in nearly every town who are able to organise others when needed. These people do not expect to be paid, but if once in 15 years a fire or flood affects the town, they will know what to do and help others. This type of government-led incentive makes sense from an economic standpoint. Hundreds of thousands of volunteers participate in training sessions every year. People are eager to get involved since volunteering gives them a sense of dignity as citizens who are ready to participate instead of passively waiting for help.

–          Is volunteerism relevant in Ukraine and can it become popular among Ukrainians?

About two thousands Ukrainians die in household fires each year. In most cases these deaths could have been avoided through citizen social mobilisation. Although the emergency services are working well, people are still dying. More than just the efforts of specialists are required to change this trend. This includes house and forest fires, floods, preventable emergencies caused by faulty equipment etc. Because of the lack of resources for adequate support systems, risks in Ukraine are quite high. Thus, training the population in how to react in emergency situations is very relevant. In Ukraine, there are informational -centres based on the regional departments of the State emergency service where people can apply to get a piece of advice or answers on their questions. But there are no volunteers as such and no system of organised volunteerism in Ukraine. At the same time, it is possible to organise regular specialised courses through specialized educational institutions of the State emergency service of Ukraine, but there has not been enough government support to implement this. Consultative projects, in particular EU-founded projects, could help with the organisation of a volunteerism initiative, methodologically and financially. However, such an initiative could only really be efficient within the framework of a comprehensive state programme.

–          Are there any mechanisms for citizen mobilisation that can initiate civic engagement before a threat appears?

So-called ‘crystals’ should be created. These should be the coordinating centres from which volunteer activity spreads across the country. Publicising successful cases of volunteer engagement might help to incentivise others to get involved. This method can work especially well in places where there is an obvious threat, for instance, seasonal disasters or a potentially dangerous factory. People in these situations understand how important effective preventative mechanisms are and so the popularisation of volunteerism as a social phenomenon will likely begin from these locations. Those people should be instructed and equipped with the basic instruments, handbooks, special clothes, etc. they require to perform their activities properly. Further, those ‘crystals’ should be supported both on the informational level – through spreading news about their activities – and on the legislative level. For instance, Germany provides special tax deductions for volunteers.

I am sure thousands of men are ready to dedicate a couple of days to participating in free training to learn something incredibly practical and possibility pay lower taxes. For its part, the government saves significant costs on emergency services personnel and gains a large amount of human resources that can support official relief services.

This process requires a systemic approach, and its realisation is quite complicated. However, it can have very positive outcomes for society. By investing annually certain amount of money, Ukraine could receive much more in return. Firstly, this investment forms a culture of safety because a trained person will not make a fatal mistake. Secondly, emergencies come with huge costs and the involvement of thousands of prepared people represents significant savings. However, this initiative requires long-term planning and an efficient distribution of resources.

The first phase of the international Programme for the Prevention, Preparedness and Response to Man-made and Natural Disasters in the ENPI East Region (PPRD East, 2010-2014) aims at strengthening the potential of partner states in the sphere of civil protection against natural and man-made catastrophes and refining the national civic protection mechanisms to the EU standards.

At the end of 2013, the Programme started a thematic national education campaign on volunteerism in Ukraine. It aims at improving cooperation between Ukrainian rescue services and citizens.