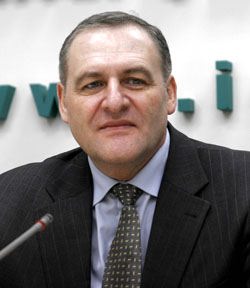 A new EU-Ukraine Cooperation project*, worth €210,000, is helping to protect human rights in Ukraine and to fight ill-treatment and torture in places of detention. We interviewed Yevhen Zakharov, a well-known Ukrainian human rights activist and the leader of the project, about the human rights situation in Ukraine. Zakharov is co-chairman of the Kharkiv Human Rights Group and head of the board of the Ukrainian Helsinki Human Rights Union.

What can you tell us about the human rights situation in Ukraine since 2010? Has it improved or gone downhill? What human rights in particular have been affected?

I don’t see significant improvements with any human rights in Ukraine. Instead, the situation of fundamental freedoms has worsened. Notably, freedom of speech and information, freedom of opinion and assembly and freedom of conscience and religion have declined. The situation with economic, social and cultural rights has worsened. Freedom of entrepreneurship and right to property face setbacks.

The situation is more complex in the law enforcement field. A progressive Criminal Procedure Code was adopted. This gives hope for improvement in certain areas of criminal justice.  For instance, fewer people will be kept in pre-trial detention centres.

But generally, only those things are progressing which don’t contradict the political and economic interests of the authorities. On the other hand, in the field of judicial reform, for example, no recommendation included into the resolution of the Parliamentary Assembly of the Council of Europe (January 2012) has been put into force.

Comprehensive judicial reform didn’t take place in Ukraine. We lack independent courts. Moreover, changes are needed in the work of the Supreme Council of Justice and principles of its organisation.

How can the situation be changed at the public policy level?

Ukraine needs systematic changes in all domains. Legislation has to be changed: the new Criminal Procedure Code only partially solves this problem. It still has to be implemented. For instance, it is important to eliminate “shadow” detentions [when a suspect is detained without full evidence, and the police is “working” with him or her in the detention centre to obtain evidence, often using ill-treatment]. It is essential that courts exclude evidence obtained in this way. After all, it is considered a violation of a constitutional right: a right not to be a witness against oneself or against someone close.

In order to eradicate this practice, we need to move away from evaluating police performance based on the percentage of solved cases. The police officers take these actions in order to attain the required figures and avoid a reduction in their salary.

Ukraine must implement Article 127 of the Criminal Code, which imposes punishment for torture. Indeed, even in cases where law enforcement officers turn to torture and are prosecuted, the Ukrainian justice system applies other articles to the case. For example, the court might apply Article 365 of Criminal Code, which foresees punishment for abusive exercise of power or malpractice.

What are you doing within your EU-funded project to improve the situation?

We try to work systematically in several directions. First of all, we are doing analytical work related to changes in legislation. In 2008, members of our organisation were involved in a working group developing the new Criminal Procedure Code. Such analysis has to take place for other regulatory acts too.

Secondly, we are working to protect victims of torture and abusive treatment, protect people from illegal extradition, and deliver decent medical assistance in detention centres.  We also represent people in court and in the prosecutor’s office. Additionally, we bring complaints to the European Court of Human Rights, as it is one of the most efficient means of protection in this situation. In fact, the Ukrainian state doesn’t investigate complaints of torture.

The third area of our work focuses on training and awareness activities. It is important that judges understand that these cases are special and that attorneys can protect the fundamental rights of citizens. Each year, together with the National School of Judges, we carry out two seminars for judges. Participants at these seminars receive handouts, including a summary of European Court decisions, analysis of court practices, and translations of European Court of Human Rights rulings against Ukraine. This initiative is aimed at raising awareness among people who are dealing directly with this problem (judges, attorneys, public prosecutors, and police officers).

It is necessary to make the public aware of these issues.  We have a special website against torture, where we post recommendations on how to behave in the situations of being tortured. Additionally, we often speak to media about these issues.

Our fourth focus area is reinforcing the network of people and organisations that address torture and abusive treatment. These include civic organisations, journalists and experts. These groups should have increased impact on the situation.

How comprehensive is your project?

Write a request to a counseling office of the Kharkiv Human Right Protection Group: http://www.khpg.org/index.php?r=1.1.5

* Project: Development of a legislative and organisational framework, based on international human rights standards, to defend human rights, with emphasis on the fight against ill–treatment. The project began in September 2012 and will last for two years. EU allocated €210,000 to implement this initiative.